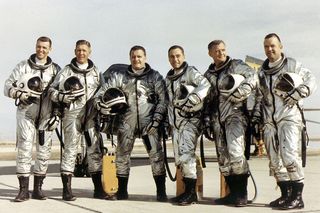 A photo from 1966 of the flight crew for the X-15 which was developed to provide data on aerodynamics, structures, flight controls and the physiological aspects of high speed, high altitude flight.
(Image: © NASA.)

First flown in 1959 from the NASA High Speed Flight Station (later renamed the Dryden Flight Research Center), the rocket-powered X-15 was developed to provide data on aerodynamics, structures, flight controls and the physiological aspects of high speed, high altitude flight. Three were built by North American Aviation for NASA and the U.S. Air Force. They made a total of 199 flights during a highly successful research program lasting almost ten years.