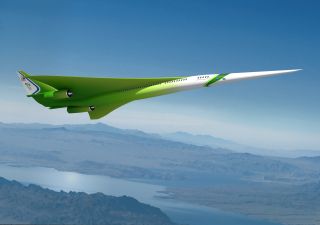 This rendering shows the Lockheed Martin future supersonic advanced concept featuring two engines under the wings and one on top of the fuselage (not visible in this image).
(Image: © NASA/Lockheed Martin)

The dream of a supersonic passenger airplane lives on. NASA is currently researching new designs for supersonic aircraft, and the space agency is now focusing on reducing the strength of the sonic booms, the bane of supersonic flight.

For a long time, scientists have known that sonic booms — the sound created by a shock wave from an aircraft that moves faster than the speed of sound — are affected by many factors, including the shape of the aircraft and where the plane's components are located. Because of this, engineers are able to change the signature of a boom by design to minimize its loudness  during flight, NASA officials said in a statement.

The Federal Aviation Administration doesn't have a specific level of "loudness" that is acceptable for a sonic boom created by a supersonic plane. In 1973, the FAA prohibited domestic civil supersonic flights overland, and this ban prevented Concorde — a supersonic airliner that stopped flying in 2003 — from making supersonic flights over land. The prohibition has helped reduce impacts on the environment and made the skies quieter, NASA officials said. But space agency officials have still been researching ways to quiet the boom and help make supersonic flights with passengers over land a reality. [NASA's Vision of Future Air Travel (Images)]

"Engine installation is a critical part of achieving an overall low boom design," Peter Coen, manager of NASA's High Speed Project, said in a statement. "If we mount the engines in a conventional manner, we need to carefully tailor the shape of the wing to diffuse the shock waves. If we mount the engines above the wing, the shock wave can be directed upward and not affect the ground signature. However, such installations may have performance penalties."

All of the new designs for a supersonic airplane — one each by Boeing and Lockheed Martin — have some basic features in common: either swept-back or delta wings, a pointy nose, and an extremely aerodynamic fuselage.

NASA is testing the designs by placing small-scale models of the proposed aircraft in wind tunnels. They are also testing models of the engines by themselves, studying how air flows through and around them.

"Capturing this flow rate is important because it directly impacts a supersonic aircraft's thrust performance in flight, as well as cruise efficiency," Coen said.

The research is being overseen by NASA's High Speed Project, a part of the agency's Aeronautics Research Mission Directorate.