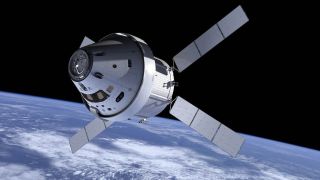 The first space-based Orion mission was in 2014. The spacecraft passed all major objectives. It orbited Earth twice and re-entered the atmosphere at 20,000 mph (32,000 km/h).
(Image: © NASA)

Lockheed Martin is an American aerospace company that is building the Orion Multipurpose Crew Vehicle for NASA. The company has over 100 years of aerospace experience, from the earliest transcontinental flights to the latest planetary probes.

In aerospace, some of Lockheed Martin's major projects today include the F-16 Fighting Falcon fighter plane, the C-130 Hercules military transport, the P3-Orion maritime patrol aircraft, and the F-22 Raptor stealth fighter (with Boeing), according to Encyclopedia Britannica. In space, Lockheed Martin is known for the Titan IV and Atlas launch vehicles and the Trident II submarine-based missile. Lockheed is also part of the joint venture International Launch Services, along with Russian companies Energia and Khrunichev. ILS markets Atlas and Proton launch services around the world.

In recent years, Lockheed built the external tank for the space shuttle and was part of the former joint Lockheed-Boeing company United Space Alliance, which operated and managed the shuttle fleet. Lockheed has also built several Mars spacecraft, including Mars Phoenix, which explored the Red Planet's south pole, and Mars InSight, which is targeted for a Mars landing in November 2018.. The company also constructed the Mars Reconnaissance Orbiter, which serves as a communications relay for the Curiosity and Opportunity rovers.

In 2017, Lockheed Martin unveiled details for a Mars Base Camp project that would allow astronauts to perform 1,000-day missions. The architecture includes a Mars Ascent/Descent Vehicle that would travel from a space station to head to Mars, before returning to the space station again. The crew quarters is expected to be based on the Orion spacecraft's design. Closer to home, Lockheed Martin is one of several companies participating in early contracts for the Deep Space Gateway, a proposed NASA space station that would orbit the moon.

The company faced stiff competition for the lucrative Orion contract when it was announced in 2004. Lockheed went toe-to-toe with Northrop Grumman and Boeing before winning the contract. It was valued at up to $8.15 billion when it was awarded in August 2006.

At the time, a spokeswoman said the employees were "humbled and excited" about winning the contract. "Work already is under way and we are fully focused on the vital tasks that lie ahead to meet NASA's requirements for the program," said Joanne Maguire, executive vice president of Lockheed Martin Space Systems, in an Aug. 31, 2006 news release.

But Orion's future fell into doubt in 2010, after President Obama cancelled the planned Constellation program. By that point, NASA had already spent $5 billion on the development. NASA hinted the spacecraft could be repurposed in April 2011. One month later, the agency unveiled a new plan to develop a Multi-Purpose Crew Vehicle based on the Orion spacecraft designs.

"We made this choice based on the progress that's been made to date," Doug Cooke, associate administrator for NASA's Exploration Systems Mission Directorate in Washington, D.C., said to reporters on May 24, 2011. "It made the most sense to stick with it (the Orion design)." [Infographic: Orion Explained: NASA's Multi-Purpose Crew Vehicle]

In November 2012, engineers discovered cracks in the spacecraft after performing a test that subjected the spacecraft to high pressure. But NASA's Rachel Kraft told Space.com that the hardware would only need a repair, not a remanufacture.

Orion's resemblance to the Apollo command module is only skin-deep. Orion can carry up to six astronauts instead of Apollo's maximum of three. Further, its heat shield is constructed of newer substances, and its computer systems, of course, include 2010s technology — a leap forward to what was available to NASA in the 1960s.

The first space-based test of Orion took place Dec. 5, 2014. The spacecraft passed all major objectives. It orbited Earth twice and re-entered the atmosphere at a velocity not seen since the Apollo moon era of the 1960s and 1970s.

The flight was called the Orion Exploration Flight Test-1. Riding aboard a United Launch Alliance Delta 4-Heavy rocket, Orion rocketed to orbit to an altitude of more than 3,600 miles (5,800 kilometers) above Earth — about 15 times the altitude of the International Space Station.

That high altitude led to a high-speed re-entry of 20,000 mph (32,000 km/h). This was supposed to demonstrate the strength of the heat shield when bringing back astronauts from destinations such as an asteroid or the moon.

"We are going to get about 84 percent of a lunar entry velocity, which is really going to stress the heat shield, which is exactly what we're trying to do," said Mark Geyer, NASA's Orion program manager, in 2012.

In the long term, Orion will launch aboard NASA's Space Launch System, which is a heavy-lift rocket still being developed. The two systems are scheduled for their first flight test together in 2019 or 2020, when SLS will propel Orion into space for an uncrewed flight around the moon. (Riding along with Orion will be 13 CubeSats to explore deep space.) Human flights are expected in the 2020s.