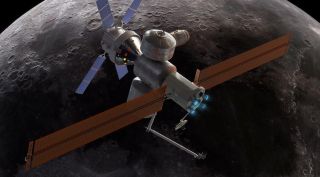 An illustration of a Lockheed Martin concept for NASA's proposed Deep Space Gateway, with the Power and Propulsion Module on the right.
(Image: © Lockheed Martin)

WASHINGTON — NASA awarded contracts Nov. 1 to five companies to examine how they could develop a power and propulsion module that could become the initial element of the agency's proposed Deep Space Gateway.

NASA issued the contracts, part of the agency's Next Space Technologies for Exploration Partnerships, or NextSTEP, program, to Boeing, Lockheed Martin, Orbital ATK, Sierra Nevada Space Systems and Space Systems Loral. The contracts, which run for four months, have a combined value of approximately $2.4 million.

Each company will perform studies regarding how they would develop the Power and Propulsion Element for the proposed gateway. The module, as currently envisioned, will generate electrical power for the gateway and move the spacecraft through cislunar space with a solar electric propulsion system, as well as provide communications.

NASA has been studying the design of the element internally for several months, said Mike Barrett, manager of the Power and Propulsion Element effort at NASA's Glenn Research Center, in a Nov. 3 interview. These studies, he said, will offer industry an opportunity weigh in with their ideas, including technologies they can offer to support the module's development.

"We've been looking at it internally, but if they have different ideas on the general concept of the gateway, how we can do that and how it aligns with their internal plans, then we're hoping to get that out of this as well," he said.

The element does have some similarities with the robotic portion of the now-cancelled Asteroid Redirect Mission (ARM), in which a robotic spacecraft would have used solar electric propulsion to travel to a near-Earth asteroid and return to cislunar space with a boulder retrieved from that body. NASA awarded study contracts for an ARM spacecraft bus and later solicited proposals for its construction, but never issued a contract for it.

"There is quite a bit of learning from the work on the Asteroid Redirect Robotic Mission that we're able to take forward," said Michele Gates, director of the Power and Propulsion Element at NASA Headquarters and former program director for ARM, in a Nov. 3 interview. One of the objectives of the study contracts, she said, is to have the companies outline how the differences between the missions affect what capabilities they have to offer for the vehicle.

"There is a degree of similarity that the team is able to take advantage of and help us get off on a very solid start," she said.

NASA has separately been developing a 50-kilowatt solar electric propulsion system for use on the element that could later evolve into more powerful systems suitable for missions to Mars. Companies involved in the study contracts can use that system in their designs or propose their own, provided it has similar capabilities and growth potential.

"We didn't prescribe the use of the current technologies we've developed," Barrett said. "But to be successful, we do believe it would have to be systems that have the equivalent performance to meet the same requirements. To our knowledge, the array developments and the [electric propulsion] string developments that we have are the only things that can."

NASA, he said, is interested in other technologies that companies can offer, including helping mature those that can be used for the Power and Propulsion Element as well as commercial applications. "If we have demonstrated a new technology that enables a new capability for them, and matches with us, that helps a lot with their customers downstream," he said.

This study is separate from another ongoing set of NextSTEP awards made in 2016 to examine development of habitat modules that could be used on the Deep Space Gateway as well as other commercial applications. All five of the companies that received contracts for Power and Propulsion Element studies also either have a NextSTEP habitat award or are partnered with a company that does.

"This is a distinct activity but highly coupled" to the habitat studies, Barrett said. Both NASA and, he expected, the companies are coordinating their work on the two studies. "They're separate in terms of work scope, but the coordination, at least on the government side, is very deliberate."

How NASA plans to proceed with development of the element, including how it procures it from industry, will depend on the outcome of the studies as well as NASA's overall exploration planning, said Gates. The Deep Space Gateway remains a concept and not a formal NASA program as the agency studies options for its development, including roles for commercial and international partners.

Under NASA's notional plans for the gateway, the Power and Propulsion Element would be the first module of the gateway launched, flying on the Exploration Mission (EM) 2 launch of the Space Launch System along with an Orion spacecraft. Future SLS/Orion launches would carry other parts of the gateway, including a habitation module, logistics module and airlock.

That EM-2 mission, which will also be the first crewed flight of Orion, is planned for the early 2020s. "We have quite a lot of work in front of us," Gates said.