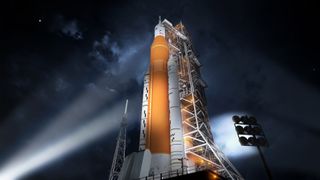 NASA's Space Launch System, currently under construction, is intended to carry the agency's Orion spacecraft out beyond the moon.
(Image: © NASA)

The first launch of NASA's Space Launch System, which will carry the new Orion spacecraft, should still be possible by December 2019, according to NASA officials, although a new report puts the estimated launch date at June 2020.

The mission, called Exploration Mission 1 (EM-1), will be uncrewed — although, earlier this year, NASA considered adding crew — and will pave the way for future missions to the moon and deep space.

NASA's review considered challenges related to building the SLS rocket's core stage, issues with constructing Orion's first European service module and tornado damage at the Michoud Assembly Facility in New Orleans, NASA officials said in a statement. [How NASA Plans to Get Humans Back to the Moon (Video)]

"While the review of the possible manufacturing and production schedule risks indicate a launch date of June 2020, the agency is managing to December 2019," Acting NASA Administrator Robert Lightfoot said in a statement.

"Since several of the key risks identified have not been actually realized, we are able to put in place mitigation strategies for those risks to protect the December 2019 date," Lightfoot added.

Officials said in the statement that the majority of the work for EM-1 is on track, and that they are addressing the risks described in the report: They've set up new production performance milestones for the SLS core stage as well as helped the European Space Agency plan for possible late subcontractor deliveries.

NASA is still on target to cover the costs of EM-1 for a 2019 launch. If the launch is delayed until June 2020, the costs for the project will stay within the 15-percent limit for SLS, and will be slightly above for ground systems, they added. The agency is currently building hardware for EM-1 and the following mission, which would bring astronauts aboard.

"NASA's cost commitment for Orion is through Exploration Mission-2," officials said in the statement. "With NASA's multi-mission approach to deep space exploration, the agency has hardware in production for the first and second missions, and is gearing up for the third flight. When teams complete hardware for one flight, they're moving on to the next."

NASA has decided to test Orion's launch abort system before EM-1, and is targeting April 2019 for that test. That system would help astronauts get to safety during a launch malfunction.

In the meantime, NASA will continue to aim for that 2019 launch. All five parts of the SLS core stage are built, as of October; the completed core stage will be taller than a 20-story building and will carry more than 700,000 gallons (2.6 million liters) of propellant.