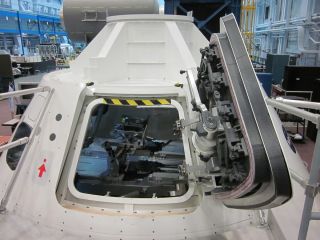 A mockup of the Orion capsule at NASA’s Johnson Space Center in Houston shows the space agency’s next-generation spacecraft, designed to carry humans beyond low-Earth orbit to the moon, asteroids, and Mars.
(Image: © Orion Capsule Mockup)

The pieces are coming together for NASA's newest spaceship Orion, with its first unmanned launch test scheduled for September 2014.

The Orion space capsule is designed to carry humans farther into the solar system than they've ever been by taking trips to the moon, asteroids and Mars.

It will be the first new spaceship built by NASA since the space shuttle was developed in the 1970s. The space agency is planning to outsource travel to low-Earth orbit, including the International Space Station, to the private space sector, allowing NASA itself to focus on traveling beyond.

"I think having a test flight in '14 is huge — people can see it right there," Orion program manager Mark Geyer told SPACE.com in September. "It's a really important goal."

Orion was originally conceived as a next-generation spacecraft, called the Orion Crew Exploration Vehicle, under NASA's now-defunct Constellation program. When that program was cancelled by the Obama administration, the Orion design was carried forward as the Orion Multi-Purpose Crew Vehicle.

The engineering team behind the capsule has weathered political ups and downs, but say they are glad to be approaching flight time for the craft. [Photos: NASA's Orion Spaceship Test Explained]

"It's hard to put in 80 hours a week and then have somebody go, 'I don’t want to do that anymore,'" Geyer said. "We kind of went through that two years ago, but fortunately we came out on the other side."

Orion first test flight will be called the Exploration Flight Test 1 (EFT 1), and will include a test of more than half the systems that will appear in the ultimate finished Orion. These include its heat shield, which is a totally novel design made of a special composite material and an ablative coating deigned to burn off as the capsule re-enters Earth's searing atmosphere for the trip home.

EFT 1 will also test the capsule's primary structure design and put its avionics and computer systems through their paces.

However, for this first flight test Orion will ride to space aboard a Delta 4 heavy rocket — a proven flight vehicle from ULA (United launch Alliance) that won't be its ultimate booster. Eventually, Orion is planned to launch toward the moon and beyond on NASA's Space Launch System (SLS), a new heavy-lift rocket still under development. The first flight test for Orion and SLS together, called Exploration Mission 1, is slated for 2017.

Orion and SLS are set to carry humans onboard for the first time in 2021.

On the surface, Orion looks like a modernized Apollo capsule. Both vehicles are cone-shaped and launch vertically atop heavy-lift rockets. However, the similarities are only skin deep.

Where Apollo could carry three astronauts to the moon, Orion is bigger and can take four. The 1960s-era Apollo capsule featured computer technology inferior to that of a smart phone, while Orion is controlled by state-of-the-art technology. Its heat shield is composed of entirely new materials, and many other features are wholly novel.

"It's kind of like an automobile in 1905 had four tires and a steering wheel, and they still do now," Geyer said. "But none of the stuff inside is the same."

Between now and EFT 1, the NASA teams are working with the capsule's prime contractor, Lockheed Martin, to finish construction of Orion's systems and assemble them together. The primary body for that test vehicle is finished, while the heat shield still needs about six months more. Its avionics computers are undergoing testing now. Eventually, the whole vehicle will be put together in Florida at NASA's Kennedy Space Center in Cape Canaveral.

"I think we have a great design and we have a great plan to fly it," Geyer said. "It's time to do it, to actually put it to use and put it in the missions that are going to let us discover new things."