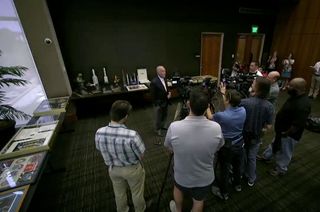 Charles Bolden did not realize that he had so much stuff to give.

A four-time space shuttle astronaut and the former head of NASA, Bolden filled 40 boxes with his papers, artifacts and mementos, which this month he donated to the University of South Carolina.

On Monday (May 14),& Bolden traveled to his hometown of Columbia to visit the school and talk with students and the university's guests about the gift, his career and the future of space exploration. [NASA Centers to Visit for an Out of This World Vacation]

"It's just things I have collected over my time in the Marine Corps and NASA," said Bolden, as reported by The State newspaper. "I didn't realize I had all this stuff."

The Charles F. Bolden Jr. Collection documents the career of the Columbia native, who launched four times to space and was the first African American to lead NASA, serving as its twelfth administrator from 2009 to 2017. Selected as an astronaut in 1980, Bolden piloted his first two missions, including the 1990 space shuttle mission that deployed the Hubble Space Telescope, before helming two missions as commander.

"It is a rich collection of information," said curator Graham Duncan in a statement& released by the University of South Carolina. "It also documents his experience as an African American at the U.S. Naval Academy, and his time in the Marines and at war in Vietnam."

The collection features Bolden's papers, including letters, speeches, schedules, notes and calendars that cover his time as a student at the Naval Academy, the 100 sorties that he flew in the Vietnam War and his time at NASA.

Among the mementos are personal items that Bolden took with him to space; items such as toothbrushes, soap and razors, as well as cassette tapes with the music recordings of Patti LaBelle and Eric Clapton, The Mormon Tabernacle Choir and The Manhattan Transfer.

Other materials include Bolden's space shuttle checklists, complete with his handwritten notations; a variety of scale rockets from foreign space programs, including models he was gifted by Russia, India and China; and a frangible nut that held down space shuttle Atlantis on the launch pad for his third mission, STS-45, in 1992. The donated collection also has solar array cells removed from the Hubble Space Telescope; aerial photographs of Earth used in identifying continents and countries from orbit; and framed displays commemorating Bolden's space missions.

"Bolden is a true role model for aiming high in establishing and accomplishing personal goals so it's a great honor and responsibility for [the university] to receive his collection," said Tom McNally, dean of the University of South Carolina libraries.

The university plans to make Bolden's collection available to students and the public, even beyond the campus.

"Once we inventory and catalog all the items, which will take about a year, a portion of the collection will become a traveling exhibit," described McNally. "We will share some of the unique items in the collection with schools, libraries and museums statewide so that students will have access to the amazing items it contains."

"It will inspire learners for generations to come," he said.

Bolden is not an alum of the university, though in 1984, the school awarded him an honorary doctor of science degree. Rather it was a different type of connection that led Bolden to choose the University of South Carolina for the donation.

"When my mother passed in 2002, [the university's] library asked my brother, Warren, and me about making her work as an educator part of a permanent collection," he said. "I was incredibly impressed with how it was handled and how it has contributed to the growth of students."

Bolden's mother, Ethel Martin Bolden, was an educator, a librarian and a community leader. In 1968, she became the first African American professional at Dreher High School, also in Columbia, where she worked until her retirement in 1982.

"I would like to think my collection adds to her story," said Bolden, "and continues her work."

"I hope that this collection inspires students and people of all races, creeds and colors to look at my mom's work, and mine, and see that there is no limit to what they can do in their lives, if they take time to study and prepare — and to take risks," he said.