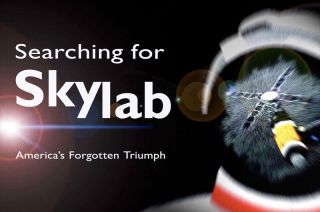 Before the International Space Station and before the space shuttle, but after the last astronauts walked on the moon, nine Americans took the first steps to establishing a U.S. foothold in Earth orbit.

Skylab was the first U.S. space station, but today, beyond a few museum exhibits and the occasional reference to its eventful end, the orbital workshop is largely missing from public view. A new feature-length documentary, "Searching for Skylab," is aimed at correcting that oversight.

"Skylab was a crucial element in human space exploration — which happened to fall in the immediate shadow of the Apollo lunar missions," explains director and writer Dwight Steven-Boniecki. "Hundreds of hours of video and audio recordings exist from it, yet it is unlikely that you've seen or heard much of it."

"If you thought landing on the moon was great, wait to you hear what we did on Skylab," says Ed Gibson, who served as the science pilot on third and final mission to Skylab, in the trailer for "Searching for Skylab." [Skylab: The First U.S. Space Station in Pictures]

To finish the documentary so it can be ready to help mark Skylab's 45th anniversary, the filmmakers have turned to Kickstarter to raise the remaining $20,000 they need.

Built out of a converted upper stage from one the Saturn V rockets designed to send the first astronauts to the moon, Skylab provided the United States with its first platform for longer duration missions in space.

"Skylab is the first time that orbit becomes a destination," states David Hitt, co-author of "Homesteading Space: The Skylab Story," in a clip from "Searching for Skylab."

Three crews of three astronauts each lived and worked on Skylab between May 1973 and February 1974. Each flight set a record for the amount of time crew members spent in space — Skylab 1 for 28 days, Skylab 2 for 59 days, and Skylab 3 for 84 days.

Surviving members from all three crews were interviewed for "Searching for Skylab," including Gibson, Joe Kerwin, Jack Lousma, Owen Garriott and the late Paul Weitz prior to his death in October 2017.

Steven-Boniecki also spoke with members of the ground crew whose ingenuity and quick work were instrumental to saving Skylab before its science mission could begin.

A meteoroid shield was ripped off Skylab during its launch, which in turn took out one of the space station's two solar arrays.

"It looked like a perfect launch to us... but something bad was going on," recalls Kerwin, the science pilot on the first Skylab crewed mission.

Steven-Boniecki was born and lived for a time in Australia, where debris from Skylab rained down after its destructive re-entry into the atmosphere in 1979. He previously edited the NASA Skylab mission reports for mass publication and authored two books, "Live TV From The Moon" and "Live TV from Orbit," detailing how the television footage filmed in space reached audiences on Earth. [Space Station Evolution: 6 Amazing Orbital Outposts]

He has wrapped filming on "Searching for Skylab," but the production still requires the service of an experienced color grader and needs to acquire archival NASA footage to be ready for its scheduled debut at the Spacefest convention in Tucson, Arizona in July.

Those who back the "Searching for Skylab" crowd-funding campaign will see their names listed in the film credits and will receive digital or Blu-ray copies of the documentary, as well as patches, posters and exclusive copies of the music composed for the film, depending on their pledge level.

A similar approach was adopted by a different anniversary-timed space documentary. "First to the Moon: The Journey of Apollo 8" from director Paul Hildebrandt surpassed its $50,000 goal on its second try on Kickstarter, with a week still remaining before the campaign ends on March 17.

Watch the trailer for Dwight Steven-Boniecki's "Searching for Skylab" at collectSPACE.