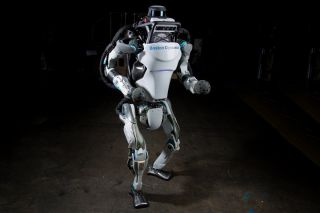 A new version of a humanoid disaster robot, called Atlas, can do half-turns in the air and even a backflip.
(Image: © Boston Dynamics)

The eerily humanoid robot, called Atlas, is 4.9 feet (1.5 meters) tall and weighs 165 pounds (75 kilograms), and uses Lidar and stereovision to navigate in its surroundings, according to Boston Dynamics, which makes the robot. Atlas is designed to be able to take on emergency situations where human life would normally be put at risk, such as going into buildings that have crumbled after an earthquake, or dealing with patients who have deadly, highly infectious diseases, according  to the Defense Advanced Research Projects Agency (DARPA).

In the video, the newest version of the humanoid does a kind of jump training called plyometrics, leaping between raised platforms, doing a 180-degree turn in the air on raised platforms and performing a backflip off a platform. Though he may not give American gymnast Simone Biles a run for her money right now, the robot does manage to stick the landing. [Machine Dreams: 22 Human-Like Androids from Sci-Fi]

Other videos show the robot stacking boxes on a shelf, ambling on a walk in the snow with a human "friend" and chasing after, and picking up, a box that's deliberately moved out of its reach. According to the Boston Dynamics website, Atlas can carry payloads up to 24 lbs. (11 kg).

Atlas has other human-like abilities, such as a sense of balance, so it resists toppling when pushed, and can get back up after a fierce shove.

The current version of Atlas isn't yet as agile as the average human; when it walks, it uses an awkward gait resembling a person who really, really has to get to a bathroom. And though it can travel over rough terrain, video seems to show it stumbling where a human might be fine.

Still, the current version of Atlas is a dramatic improvement over its ancestors: In 2013, when it first debuted at the DARPA Robotics Challenge, Atlas weighed 330 lbs. (150 kg) and required a cord for power, Technology Review reported at the time.