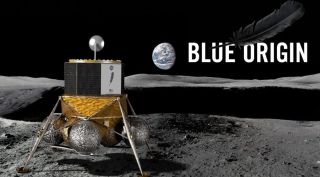 Blue Origin's proposed Blue Moon system could land payloads weighing up to several tons on the surface of the moon.
(Image: © Blue Origin)

At the annual meeting of the Lunar Exploration Analysis Group (LEAG) and a follow-on "Back to the Moon" workshop here, four companies presented plans to develop robotic lunar landers that they argued could serve both commercial and government missions to the lunar surface in support of that new policy.

Opportunities for partnership presented at the meetings by those companies range from the purchase of services on commercial landers under development to the use of public-private partnerships to develop those systems. [21 Most Marvelous Moon Missions of All Time]

Blue Origin has pushed for the latter with Blue Moon, a robotic lander capable of landing up to five tons of cargo on the lunar surface. "We've been very explicit publicly over the last few months that we want to go together to the Moon with NASA," said Blue Origin's A.C. Charania at the Back to the Moon workshop Oct. 12. "We don't view Blue Moon in isolation."

He suggested that Blue Moon could be used initially to fly Resource Prospector, a NASA rover mission weighing a few hundred kilograms under development for launch in the early 2020s. NASA had initially been looking at international partners for landing the rover, but more recently project officials said a public-private partnership would be a more likely way to get to the moon.

"We can provide, in the next five years, a space transportation capability to get the Resource Prospector rover to the lunar surface that is directly scalable to 4.5 metric ton capability," Charania said.

Three other companies — Astrobotic, Masten Space Systems and Moon Express — are already working with NASA through the Lunar Cargo Transportation and Landing by Soft Touchdown, or CATALYST, program. That program offers technical support to the companies through unfunded Space Act Agreements.

Nantel Suzuki, the program executive for Lunar CATALYST at NASA, estimated the agency has spent about $10 million on the program through in-kind contributions to the companies. "All three of our partners have made substantial progress," he said.

Those companies are developing landers that they believe will be ready for missions within the next few years. Astrobotic is planning its first Peregrine lander mission in 2019, while Moon Express expects to launch its MX-1E lander in 2018. Maston Space Systems is working on its XL-1 lander that could be ready by the end of the decade as well.

One issue is aligning the development of those vehicles with NASA and other customers. "Timing is the biggest thing," said Sean Mahoney, chief executive at Masten, during an Oct. 13 panel discussion. "You can't be too early and you can't be too late."

NASA officials have already indicated plans to solicit proposals for payload transportation services to the lunar surface, based on responses to a request for information issued earlier this year. A formal request for proposals is due out by the end of the year.

Dan Hendrickson, director of business development at Astrobotic, suggested that NASA develop a "Frontier Class Lander Services" program for the regular delivery of scientific and other payloads to the lunar surface, which he described as analogous to existing launch services programs.

"Any time NASA has an opportunity for a particular instrument that it wants to have on the surface of the moon, you can have this contractual mechanism where it's just like launch services," he said. "This is a really smart and fantastic way to leverage all that progress that's happened organically in the private sector."

Bob Richards, chief executive of Moon Express, cautioned NASA not to get too heavily involved in predicting what markets and services are best suited to the private sector. "Just be a customer," he said. "We don't need another market study."

During another panel discussion at the workshop, though, others cautioned about putting too much reliance on private ventures for NASA's lunar return plans. Tom Culligan, a former House staffer, supported NASA's efforts through Lunar CATALYST and other efforts to support commercial capabilities, but said tighter integration might be a more difficult sell in Congress.

"Congress is not prepared, I believe, to put a private entity in its critical path, if it's a national goal for geopolitical reasons or for technology development, because it fundamentally comes down to what is in the taxpayers' and the nation's interests," he said.