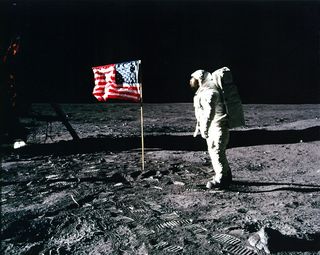 Live from the Moon

Of the dozens of missions, manned and unmanned, that have been sent to the moon, here are some highlights. These include GRAIL, the Apollo flights, the Soviet Luna missions, China's historic Chang'e 3 landing and more.

Check out some of the biggest, boldest and best moon missions of all time in this countdown.

This unmanned Soviet probe became the first man-made object to make contact with another planetary body. The spherical spacecraft launched on Sept. 12, 1959 and impacted the moon two days later.

This Soviet follow-up to the first moon impactor became the first spacecraft to take pictures of the far side of the moon. The spacecraft launched Oct. 4, 1959.

This U.S. spacecraft captured about 4,300 images of the lunar surface — the first high-quality photos sent back from the moon. It later crashed landed in the Sea of Clouds. It launched July 28, 1964

This unmanned Soviet probe became the first to make a controlled landing on the lunar surface. On Feb. 3, 1966, Luna 9 touched down into a moon crater, and then sent back panoramic images of the landscape.

Racking up another Soviet first, this mission became the first man-made object to successfully orbit another celestial body. The unmanned probe launched March 31, 1966, and entered orbit around the moon two days later. Over two months, the spacecraft circled the moon 460 times and continuously transmitted readings.

In June 1966, the United States accomplished what the Soviets had four months earlier, by successfully landing a probe on moon in a controlled manner. Over a six-week mission, Surveyor 1 snapped over 11,100 images of the lunar surface.

This U.S. mission was part of a series of unmanned lunar prospecting missions in preparation for the manned Apollo landings. Upon completion of the Lunar Orbiter 5 mission, the moon's surface had been 99 percent mapped. The spacecraft launched Aug. 1, 1967, and completed its mission on January 31, 1968.

On Dec. 21, 1968, NASA astronauts Frank Borman, James Lovell, and William Anders became the first humans to leave low-Earth orbit and visit the moon. They arrived in lunar orbit on Christmas Eve, Dec. 24, 1968, and sent back the famous first human views of Earth rising from the horizon of the moon. After 10 orbits of the moon, the three astronauts headed back to Earth and landed on Dec. 27, 1968.

The United States made up for its slow start in the space race with the Soviets by grabbing the ultimate prize: landing the first man on the moon. NASA astronauts Neil Armstrong and Buzz Aldrin stepped down on the Sea of Tranquility on July 20, 1969, while their crewmate Michael Collins orbited above in the Apollo Command and Service Module. The three returned home on July 24, 1969.

In between American Apollo manned flights, the Soviet Union launched this unmanned sample return mission to the moon on Sept. 12, 1970. Luna 16 landed on the lunar surface (in total darkness, no less), collected moon rocks, packed them up, and returned them to Earth. It was the first successful robotic sample return.