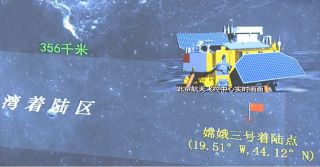 China's Chang'e 3 spacecraft landed on the moon at 8:11 a.m. EST on Dec. 14, 2013. This graphic is a depiction of Chang'e 3 with solar arrays deployed overlaid on imagery of its target landing site on the moon's Bay of Rainbows.
(Image: © China Aerospace Science and Technology Corporation)

China has landed its first robotic lander on the moon, a historic lunar arrival that makes the country only the third nation to make a soft-landing on Earth's celestial neighbor.

China's Chang'e 3 moon lander and its Yutu rover touched down on the moon Saturday (Dec. 14) at about 8:11 a.m. EST (1311 GMT), though it was late Saturday night local time at the mission's control center in Beijing during the landing. It is the first soft-landing on the moon by any spacecraft in 37 years.

Chang'e 3 launched toward the moon on Dec. 2 Beijing time to begin its two-week trek to the lunar surface. The spacecraft arrived in lunar orbit about five days after launch, and then began preparing for landing. A camera on the spacecraft snapped 59 photos of the moon during the descent, including a view straight from the lunar surface just after touchdown. [See photos from China's Chang'e 3 moon rover mission]

China on the moon

Following a lengthy engine burn Saturday, the mooncraft lowered itself to the lunar surface on autopilot, making what appeared to be a smooth touchdown on the Bay of Rainbows in the moon's northern hemisphere. The descent from lunar orbit to the moon's surface took about 12 minutes.

Chang'e 3's soft-landing was billed as the "black 12 minutes," deemed as the most difficult task during the mission, said Wu Weiren, the lunar program's chief designer. [Most Amazing Moon Missions of All Time]

Shortly after landing, Chang'e 3 deployed its vital solar arrays, which were folded for the landing, to begin generating power for its lunar surface mission. The lander is now expected to unleash the instrument-laden Yutu rover, built to trundle across the dusty, time-weathered terrain for months.

The Yutu rover (its name means "Jade Rabbit") is named after the pet rabbit that travels with the goddess Chang’e to the moon in Chinese legends. Chang'e 3 is China's third lunar mission to carry the name, but the first to land on the moon. The first two Chinese lunar missions only orbited the moon.

The six-wheeled Yutu rover is a solar-powered vehicle equipped with cameras, a robotic arm tipped with science gear and a radar system attached to its underbelly. [How China's Chang'e 3 Yutu Moon Rover Works (Infographic)]

The stationary lander itself also is geared to observe Earth, astronomically eye other celestial objects from the moon, as well as watch the Yutu rover wheel across the lunar terrain.

Chang'e 3 transmitted live images as it neared the surface of the moon.

"It seems that Chang'e has decided on its landing site," one Chinese TV commentator said on state-run CNTV news during the spacecraft's descent.

Applause broke out in the Chang'e 3 mission control center when the lander plopped down on the moon.

"China succeeds in first attempt at soft-landing on the moon," a running banner noted on China’s CCTV.

Very little dust appeared to be kicked up during the landing as the vehicle's motor cut off as planned just above the moon's landscape. The Chang'e 3 lander then drifted down onto the barren terrain.

And there was another touch of space history marked during China's moon landing.

"Here is a very interesting angle," said James Rice, science team member of the Mars Exploration Rover Project and senior scientist at the Planetary Science Institute. "On this date in 1972, Apollo 17's Gene Cernan took the last steps from the moon’s surface as he climbed aboard the Challenger lunar module."

"This is a great day for lunar science and exploration, with the first successful soft landing on the surface of the Moon since the Soviet Union did it in 1976," said Clive Neal, a leading lunar scientist at the University of Notre Dame's Department of Civil and Environmental Engineering and Earth Sciences.

"Congratulations to the Chang'e 3 team and China," Neal told SPACE.com.

Neal said that Chang'e 3's touchdown "demonstrates the potential for renewed robotic exploration on the lunar surface that will inevitably lead to new scientific discoveries. I am very excited!"

"From the widest lens, the resurgence of multi-national interest in the moon is an important signal that the moon is not an artifact of history … but a new world that's important to our future," said Bob Richards, co-founder of Moon Express, the private U.S. entrepreneurial group working on its own lunar lander system.

"With a narrow lens, I hope the U.S. will be inspired to support a return to the moon through the power of commercial space entrepreneurship coupled with smart government partnerships and incentives," Richards told SPACE.com.

Richards said that China landing on the moon signals a new era of human expansion into space.

"I hope the U.S. and others return to the moon as a frontier of peaceful international exploration and economic development," he said.

"The first two nations to reach the surface of the moon were in a race to do so," Richards said. "China becomes the third nation to land on the moon in the context of a long-term national commitment to lunar exploration and settlement. I am hopeful that humanity’s future exploration and development of the Moon will unfold with peace and prosperity for everyone on Earth."

"Many around the world have been waiting decades for this moment," Robinson said. "I can't wait to see images of the rover, lander, and landscape! Exciting!"

Late Friday (Dec. 13), NASA released an official statement on China's Chang'e 3 mission, one geared specifically toward the science benefits of the endeavor.

"China's lunar lander may provide additional science for NASA spacecraft," NASA officials said in the statement. "Scientists using four NASA spacecraft currently studying our lunar neighbor may get an opportunity to gather new data from the expected December 14 landing of the Chang'e 3 lunar rover. U.S. and international researchers view the pending arrival as a new scientific opportunity that could potentially enhance studies and observations of the lunar atmosphere."

China’s robotic lander arrives on the heels of NASA's LADEE moon dust spacecraft (the name is short for Lunar Atmosphere and Dust Environment Explorer), which launched to the moon in September. NASA's Lunar Reconnaissance Orbiter, and two other U.S. probes — called the Acceleration, Reconnection, Turbulence and Electrodynamics of Moon's Interaction with the Sun (ARTEMIS) — continue their science missions, the NASA statement explains.

"Although there is no cooperation between the U.S. and China on these missions, U.S. researchers could see potentially interesting science from the landing. The data will be made available to the international science community," NASA officials said in the statement.

"We are still going strong but many more hours to go. So far the support was flawless," said Erik Soerensen, head of the ground facilities external services section at the ESA's European Space Operations Centre (ESOC) in Darmstadt, Germany, in an email to SPACE.com just after landing.

The New Norcia station will be complemented with the ESA station in Cebreros, west of Madrid, Spain, to provide position determination of the Chang'e 3 lander's touchdown location.

Leonard David has been reporting on the space industry for more than five decades. He is former director of research for the National Commission on Space and is co-author of Buzz Aldrin's new book "Mission to Mars – My Vision for Space Exploration" published by National Geographic. Follow us @SPACEdotcom, Facebook or Google+. Originally published on SPACE.com.