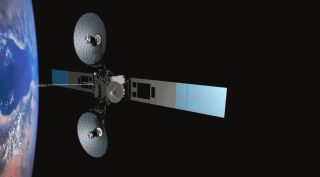 TDRS-M is the third and final spacecraft in a series built by Boeing for NASA. The spacecraft provide S-, Ka- and Ku-band communications services for the International Space Station, Hubble Space Telescope, and other spacecraft in Earth orbit.
(Image: © NASA)

WASHINGTON — NASA announced July 26 that the launch of a communications satellite damaged during payload processing activities earlier this month has been rescheduled for Aug. 20.

In a statement, NASA said it has given satellite manufacturer Boeing approval to replace an S-band omnidirectional antenna on the Tracking and Data Relay Satellite (TDRS) M spacecraft. That antenna was damaged during final spacecraft closeout activities July 14 at an Astrotech Space Operations facility in Titusville, Florida.

At the time of the incident, NASA had planned to launch TDRS-M on a United Launch Alliance Atlas 5 on Aug. 3. The agency said it has rescheduled that launch from Cape Canaveral Air Force Station for Aug. 20. [How NASA's Communications Satellite Net Works (Infographic)]

Neither NASA nor Boeing have disclosed details about the incident that damaged the spacecraft. "Boeing and NASA are working closely to investigate the causes of the incidents to ensure safe repair and processing of the spacecraft," Boeing said in a statement. The company said it was bringing in personnel "to assist in the investigation, implement the necessary repairs and spacecraft processing, and incorporate systemic improvements to eliminate future risk to these vital missions."

At a July 24 meeting of a NASA Advisory Council committee, Greg Williams, deputy associate administrator for policy and plans in NASA's Human Exploration and Operations Mission Directorate, suggested that the spacecraft was damaged while being moved, or being prepared to be moved, by a crane in the processing facility.

"It was fueled and in the upright position, and ready to be encapsulated, and we had a little challenge there with a crane operation," he said. He added that preparations for the launch had been going "very well" up until that point.

TDRS-M is the third and final satellite in a series built by Boeing under a NASA contract awarded in 2007. The geostationary orbit satellites are also equipped with two parabolic antennas for Ka-, Ku- and S-band communications, a phased-array antenna that supports multiple S-band users and a dedicated space-to-ground antenna. Those antennas support communications with the International Space Station, Hubble Space Telescope and other satellites in Earth orbit.

With the launch of TDRS-M, Williams said NASA's satellite communications infrastructure will be in good shape at least through the mid-2020s. "Then we'll be looking at the next iteration, with a few studies over the next few years," he said.