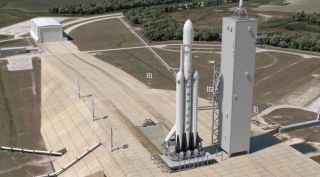 WASHINGTON — SpaceX has raised more than $350 million in a new funding round that values the company at $21.2 billion, according to data obtained by a financial company.

Equidate, a San Francisco company that operates a market for trading shares in privately-held companies and publishes financial information about them, said that SpaceX had closed a $351 million funding round, designated Series H, in July. News of the funding was first reported by the New York Times, which recently profiled Equidate.

The Series H round gives SpaceX a valuation of $21.2 billion, making it one of the most valuable privately-held companies. That valuation is a 75 percent increase over the company's value from its last funding round, a $1 billion investment led by Google and Fidelity in January 2015 that valued SpaceX at $12 billion. [SpaceX: First Private Flights to Space Station]

Equidate, which says it obtains information from corporate filings, did not provide additional information about the round, including the companies or funds that led it. SpaceX has not filed a notice of the funding round with the U.S. Securities and Exchange Commission (SEC). A company spokesman did not respond to a request for comment about the round July 27.

The round would bring the amount raised by SpaceX to date to $1.58 billion, based on the amount of previous funding rounds dating back to the company's founding in 2002.

It is not clear what SpaceX will do with the new capital. The company has ambitious projects in the early stages of development, including a proposed broadband constellation that will require the launch of thousands of satellites, as well as plans to develop vehicles to send people to Mars, but both will need far larger sums of money to implement.

SpaceX may be getting assistance to raise money for those megaprojects. The publication Axios reported that Luke Nosek, a member of the board of directors of SpaceX, was leaving Founders Fund, the venture capital firm that he co-founded and which has previously invested in SpaceX.

Nosek reportedly plans to establish a new fund, Gigafund, that will raise money to ensure that SpaceX "won't have debilitating capital constraints," Axios reported. Nosek and Stephen Oskoui, another Founders Fund partner, filed documents with the SEC July 26 seeking to raise $100 million for Gigafund, but not disclosing other details about its plans.

While SpaceX has not commented on the funding round, chief executive Elon Musk did make an announcement late July 27. Musk said on social media that SpaceX is now expecting the first launch of its Falcon Heavy rocket this November.

Musk, in comments July 19 at the International Space Station Research and Development Conference here, lowered expectations about the success of that launch, emphasizing the challenges of launching a rocket with 27 engines in its first stage.

"There's a lot of risk associated with the Falcon Heavy," he said. "There's a real good chance that vehicle does not make it to orbit. I want to make sure and set expectations accordingly."