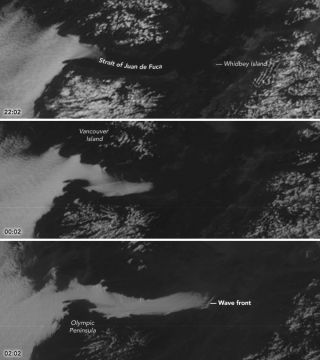 The Pacific Northwest is known for its foggy weather, and satellites recently captured a ghostly scene as thick veils of fog spilled into the Strait of Juan de Fuca.

The channel between Washington state and Vancouver Island frequently fills with fog during the summer and fall, when weather conditions allow surface heat to escape and air to cool, leading to fog, according to NASA. However, these conditions can occur at any time of year. On May 20, the National Oceanic and Atmospheric Administration's GOES-16 satellite witnessed such an event.

Strong winds pushed coastal fog from the Pacific Ocean eastward, and it eventually snaked into the Strait of Juan de Fuca. The Earth-watching GOES satellites follow the planet's orbit while maintaining a set position over a region. This geostationary orbit allows the satellites to capture weather events, such as the slow creeping of the fog into the strait. [Earth from Above: 101 Stunning Images from Orbit]

The GOES-16 satellite's Advanced Baseline Imager even captured a wave structure in the clouds. These "bow shock waves" — like the waves made by a ship moving through water — were formed when the fog interacted with a landmass.

"This fog feature and its motion were more accurately depicted by the improved spatial and temporal resolution of GOES-16 imagery," Scott Bachmeier, a research meteorologist at the University of Wisconsin-Madison, said in a statement. "The small-scale 'bow shock waves' would probably not have been seen with lower-resolution GOES visible imagery."

According to Bachmeier, the winds that carried the fog into the strait were blowing at about 17 mph (28 km/h) in the afternoon. Gusts strengthened in the evening to 31 mph (50 km/h), he added.

Similar wind events during foggy conditions led the strait to fill with fog in April 2013 and August 2016, and both events were captured by lower-resolution satellite imagers.