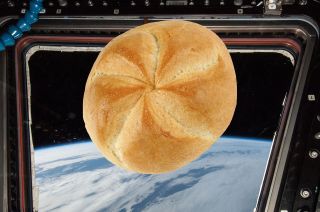 Bake In Space aims to make crumb-free German rolls on board the International Space Station in 2018.
(Image: © NASA/Wikipedia via collectSPACE.com)

A new space experiment is taking the baking tip "let your bread rise" to the extreme.

Slated to launch to the International Space Station in 2018, "Bake In Space" will test a specially-devised dough with a microgravity oven to bake bread in orbit for the first time in history.

"Baking where nobody baked before," the team behind the Bake In Space experiment quipped. "Bake In Space seeks to address the scientific and technical challenges relating to the production of fresh bread in space." [Space Food Evolution: How Astronaut Chow Has Changed (Photos)]

Led by group of German scientists, engineers and science communicators, including former shuttle astronaut Gerhard Thiele, Bake In Space is not just about adding to the space station crew's menu, but meeting the needs and desires of future astronauts as spaceflight opens to more people.

"As space tourism takes off and people spend more time in space, we need to allow bread to be made from scratch," Sebastian Marcu, CEO and founder of Bake In Space, told New Scientist.

The Bake In Space experiment will try to produce "typical" weekend German bread rolls using a compact, low-energy convection (or possibly vacuum) oven and a special dough that produces a palatable, but crumb-free bread.

Breadcrumbs in space can be a reason for concern. Given the microgravity environment, the tiny particles can cause problems if they get into electrical systems and ventilation filters. They can also pose a health risk if inhaled.

NASA's early solution — after Mercury and Gemini crews smuggled deli sandwiches to space — was to pre-cut their bread into bite-size cubes and coat each in gelatin to keep any crumbs contained. Later, during the space shuttle era and continuing to today on the space station, tortillas took the place of loaves as the bread-product of choice.

"The first thing we need for a sandwich is a piece of bread. Well, up here, we don't have bread like you have on Earth, but we have tortillas," stated astronaut Shane Kimbrough, Expedition 50 commander, in a video recorded aboard the space station earlier this year. "So we use tortillas a lot for our sandwiches."

The difficulties with developing a fresh bread for space are not limited, though, to mitigating the production of crumbs. Bread that is tough and chewy will not produce crumbs but also won't be to most astronauts' tastes.

"This is the biggest challenge," Florian Stukenborg with the research firm TTZ Bremerhaven told New Scientist.

Food for the soul

Bake In Space is about more than the taste of the bread, but also how psychologically-filling the rolls can be.

"Besides [being] a source for nutrition, the smell of fresh bread evokes memories of general happiness and is an important psychological factor," the project website states. "It is a symbol of recreational time and procedure down on Earth."

Similar dual-purpose goals were associated with Veggie, a plant chamber used to grow fresh produce on the station, and the Italian ISSPresso microgravity coffee maker tested on the orbiting laboratory in 2015.

Bake In Space, based in Bremen, Germany, is scheduled to launch to the space station during "Horizons," Alexander Gerst's second science mission on the complex as an ESA (European Space Agency) astronaut.

In addition to making bread on the space station, the Bake In Space team is also planning to experiment with creating the batter for sourdough in orbit, which could result in space-born bread going on sale on Earth.