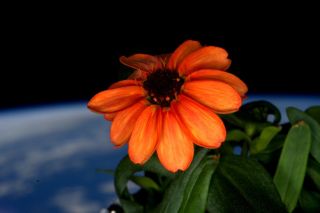 The first zinnia to bloom in space feels its first sunlight on the International Space Station.
(Image: © NASA/Scott Kelly via Twitter)

Zinnias have opened their pretty petals for the first time on the International Space Station, and NASA astronaut Scott Kelly couldn't be prouder.

The zinnias, grown as part of the Veggie program, have had a rough path: They battled excessive water, overdrying and even enterprising mold before beginning to recover in early January.

To better balance conditions for the zinnias, NASA named Kelly an autonomous gardener (or "commander" of Veggie) on Christmas Eve, so he could independently decide when the plants needed to be watered or tended to instead of waiting for directives from Earth. It looks like that hard work has paid off, with new photos of the zinnia's first vivid orangey-yellow bloom.

Earlier this year, the space station crew grew romaine lettuce (and snacked on it, while their cosmonaut colleagues were on a spacewalk), but the zinnias are a stride forward because they are more challenging to grow, with more exacting environmental requirements.

"The zinnia plant is very different from lettuce," Trent Smith, Veggie project manager, said in a statement. "It is more sensitive to environmental parameters and light characteristics. It has a longer growth duration between 60 and 80 days. Thus, it is a more difficult plant to grow, and allowing it to flower, along with the longer growth duration, makes it a good precursor to a tomato plant."

Many plants have been grown in space — including sunflowers, in 2012 — but the Veggie program aims to learn about how to grow a complicated plant through its entire life cycle and overcome the hurdles on the way.

Once they conquer zinnias, astronauts might be able to grow other flowering plants, like tomatoes, that could tide astronauts over on long journeys, NASA officials said in the statement.

But for now, the astronauts can come together to marvel at those zinnias growing far from home. Kelly is joined by NASA astronaut Tim Kopra and European Space Agency astronaut Tim Peake, along with cosmonauts Mikhail Kornienko, Sergey Volkov and Yuri Malenchenko. Along with Kornienko, Kelly will end his yearlong stay on the space station in March.