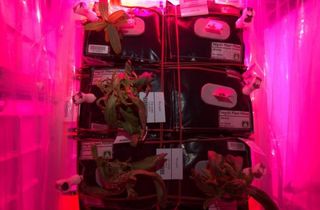 Four zinnia plants on the International Space Station are sickly or dead after mold was discovered in the Veggie experiment facility late December, according to NASA. The problem was immediately traced back to excessive water in the experiment, which was addressed. There are still three healthy plants that appear unaffected by the issue.

ISS commander and NASA astronaut Scott Kelly reported the mold to Mission Control Dec. 22 just as Veggie principal investigator Trent Smith was trying to manage the water problem. In pictures, Smith saw water on the plants a few days before. He told Discovery News he was trying to relay a command from NASA's station operations team to increase fan speed in Veggie, but the mold developed before the command could be put through.

One solution was, on Christmas Eve, to designate Kelly "commander" of Veggie. Kelly now has more autonomy to make changes to Veggie's conditions if he feels the plants need it.

Kelly is in the middle of a one-year mission on the station and was there when the first crops from Veggie, romaine lettuce, were harvested in August. "There's nobody better positioned than Scott," Smith told Discovery News, saying this decision should cut down on future time delays.

Besides turning up the fan, sanitizing the experiment and wiping the excess water out of Veggie, Kelly bagged the moldy samples and put them in a freezer on station. They will be returned to Earth on the SpaceX 8 Dragon spacecraft later this year, when NASA will perform analysis to see what kind of mold it was. Any plants that die before SpaceX 8 departs will also be returned on that flight.

VIDEO: Can We Grow Plants on Mars?

Each "pillow" of soil in Veggie was initially planted with two seeds, with the healthier of each pair culled early in their lifespans. A second plant – which Smith dubbed the "stealth plant" – sprang a little late in Pillow A (see caption in picture above), and investigators decided to leave it. Zinnias are expected to live about 60 days, but can last as long as 80, he added.

The problem was discovered about halfway through the plants' lifespan. One plant in Pillow A died, while the "stealth plant" in that pillow survived and is growing well. The plants in Pillow B and D also died quickly, and the plant in Pillow E appears deathly ill as of Jan. 4, which was Day 49 of their cycle. The zinnias in Pillows C and F, however, still appear healthy. Smith said ground investigators continue to monitor the situation through photos and talking with Kelly.

Smith added that learning is part of the goal with Veggie. "It's part of this grand experiment to find out what the plants are telling us, what can we learn from them, what can we change operationally, and what can we tell the crew to look out for when they start gardening on their own." The aim is to have crews managing their own crops for future long-term space expeditions, such as to Mars.

PHOTOS: How a NASA Astronaut is Paving the Way to Mars

Veggie, more officially called Veg-01, has been running since March 2014. The facility has seen two lettuce crops harvested. The first set of lettuce was sent back to Earth to make sure it was safe to eat. Astronauts ate the second crop of lettuce after treating them with a sanitizing agent, just as a precaution.

The zinnias are not meant to be eaten, but are good precursor plants for dwarf tomatoes, which will be grown during Veg-05 in 2018. Before then, the crews will grow romaine lettuce and tokyo bekana (Chinese cabbage). The crews will also experiment with using lighting to adjust mineral and vitamin content in the cabbage.