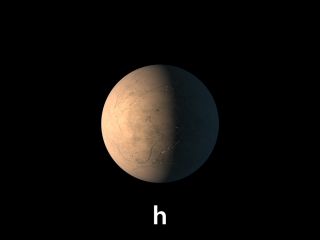 An artist's depiction of the Earth-size explanet TRAPPIST-1h around the star TRAPPIST-1.
(Image: © NASA)

The orbits of all seven Earth-size planets in the TRAPPIST-1 system are now known.

Astronomers have nailed down the path of TRAPPIST-1h, the outermost planet in the system, finding that this world takes just under 19 Earth days to complete one lap around its small, faint host star.

The new result suggests that TRAPPIST-1h is too cold to host life as we know it, and it confirms that all seven TRAPPIST-1 worlds circle their star in a sort of gravitational lockstep with one another, study team members said. [Exoplanet Tour: Meet the 7 Earth-Size Planets of TRAPPIST-1]

"It's incredibly exciting that we're learning more about this planetary system elsewhere, especially about planet h, which we barely had information on until now," Thomas Zurbuchen, associate administrator of NASA's Science Mission Directorate at the agency's headquarters in Washington, D.C., said in a statement.

"This finding is a great example of how the scientific community is unleashing the power of complementary data from our different missions to make such fascinating discoveries," Zurbuchen added.

TRAPPIST-1 is a dim, dwarf star just 8 percent as massive as the sun that lies about 40 light-years from Earth. In May 2016, astronomers using the TRAPPIST (Transiting Planets and Planetesimals Small Telescope) instrument in Chile announced the discovery of three roughly Earth-size planets in the system. That number jumped to seven with further observation by NASA's Spitzer Space Telescope, TRAPPIST and other ground-based telescopes.

Three of these seven worlds appear to orbit in TRAPPIST-1's "habitable zone," meaning they might be able to host liquid water, and therefore life as we know it, on their surfaces.

Despite such work, astronomers had not been able to pin down the path of TRAPPIST-1h. But they had noticed that the six other planets in the system are in "orbital resonance." That is, the worlds have tugged each other into stable orbits whose periods are related to each other by a ratio of two small integers.

Similarly, the Jupiter moons Io, Europa and Ganymede are in orbital resonance: For every lap Ganymede completes around Jupiter, Europa makes two orbits and Io completes four. The TRAPPIST-1 resonances are much more complex, but they adhere to the same principle.

The six planets' relationships with each other led the research team to propose six possible resonant orbits for TRAPPIST-1h. Various observations ruled out five of the six, but the sixth was confirmed with observations made by NASA's Kepler space telescope from December 2016 through March of this year, the scientists announced in the new study, which was published Monday (May 22) in the journal Nature Astronomy.

"The resonant structure is no coincidence and points to an interesting dynamical history in which the planets likely migrated inward in lockstep," lead author Rodrigo Luger, a doctoral student at the University of Washington in Seattle, said in the same statement. "This makes the system a great test bed for planet-formation and -migration theories."

TRAPPIST-1 holds the record for most planets found in orbital resonance. Second place is a tie between the exoplanetary systems Kepler-80 and Kepler-223, each of which is known to harbor four resonant worlds.

TRAPPIST-1h receives about the same amount of energy from its star as the dwarf planet Ceres, the largest object in the main asteroid belt between Mars and Jupiter, gets from Earth's sun, NASA officials said. So TRAPPIST-1h is most likely a frigid world unable to host Earth-like life, they added.

But that may not always have been the case. The star TRAPPIST-1 is thought to be between 3 billion and 8 billion years old. It was likely much brighter in its youth, perhaps bright enough to make TRAPPIST-1 habitable for several hundred million years in the ancient past, Luger said.