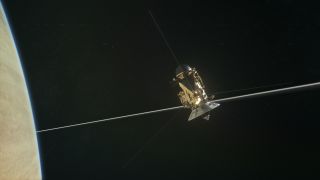 Artist's concept of the Cassini orbiter crossing through the gap between Saturn and its rings. Researchers found the previously unexplored region surprisingly empty of dust and debris, promising a smooth ride for the rest of its 22 ring dives before the spacecraft plunges into Saturn's atmosphere Sept. 15.
(Image: © NASA/JPL-Caltech)

The space between Saturn and its rings is eerily silent: Researchers monitoring the Cassini spacecraft were surprised to encounter almost no dust and debris during the spacecraft's first dramatic dive through the gap, and you can hear the strange lack of impacts in a new NASA video.

As Cassini made its first crossing last week, it turned to keep its large antenna in front of itself as a shield. But ultimately, that proved unnecessary: The spacecraft encountered very few particles, and none were larger than those found in smoke (about 1 micron across), NASA officials said in a statement. [Cassini's Ring-Diving Risks & Rewards at Saturn (Video)]

"The region between the rings and Saturn is 'the big empty,' apparently," Earl Maize, Cassini project manager at NASA's Jet Propulsion Laboratory in California, said in the statement. "Cassini will stay the course, while the scientists work on the mystery of why the dust level is much lower than expected."

Although unexpected, the emptiness is certainly welcome: Cassini's second dive today is through a region very close to its first dive, and so scientists are free to orient the spacecraft however they want, instead of using its antenna as a shield again. (Four of the craft's remaining dives pass through the inner fringe of Saturn's rings, NASA officials said, and so it will still need to be shielded at those times.)

To process the data from crossing the gap — which was gathered with Cassini's Radio and Plasma Wave Science instrument poking out from behind the antenna acting as a shield — the researchers converted it to audio format. As a result, pops and cracks marked dust particles hitting the instrument's antennas, NASA officials said, overlaid on the whistles and squeaks it normally detects.

When Cassini passed just outside Saturn's rings earlier in its mission, it detected hundreds of particle hits per second. But on this crossing, between the rings and the planet, it only detected a few.

"It was a bit disorienting — we weren't hearing what we expected to hear," William Kurth, the instrument's team lead at the University of Iowa, Iowa City, said in the statement. "I've listened to our data from the first dive several times and I can probably count on my hands the number of dust particle impacts I hear."

During its second orbit and dive, Cassini rolled quickly in place to calibrate its magnetometer, and surveyed and monitored the fine structures in Saturn's rings. And it took advantage of the spacecraft's angle and investigated the composition of Saturn's moon Rhea, according to the mission page. While crossing, it came within 1,820 miles (2,930 km) of Saturn's cloud tops, where the pressure is the same as Earth's at sea level; and it came within 2,980 miles (4,780 km) of Saturn's D ring's inner edge.

Researchers are out of contact with the craft now, but it will report back tomorrow (May 3); Earth should hear back at 11:30 a.m. EDT (1530 GMT). After it completes its 22 dives through varying parts of the ring gap, the spacecraft will plunge into Saturn's atmosphere Sept. 15 in the mission's "Grand Finale."

Editor's Note: The date on this article, and the date of the second ring dive, was mistakenly marked as May 1 rather than May 2.