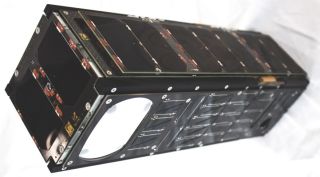 Spire, which operates a constellation of cubesats, and GeoOptics have commercial weather data contracts with NOAA under a program formally authorized by a weather forecasting bill signed into law this week.
(Image: © Spire)

The president signed the Weather Research and Forecasting Innovation Act of 2017 April 18, according to a statement from the White House. The bill originally passed the House in January on a voice vote, while the Senate approved an amended version March 29 by unanimous consent. The House adopted the Senate's version, again by a voice vote, April 4.

Among the bill's provisions is language formally authorizing the National Oceanic and Atmospheric Administration to purchase weather data from commercial satellite systems. The bill authorizes NOAA to spend $6 million a year in fiscal years 2017 through 2020 for a pilot program of data purchases to evaluate the effectiveness of commercial data to support weather forecasting.

NOAA has already started such a pilot program using $3 million appropriated to the agency in fiscal year 2016. In September 2016, NOAA awarded contracts to GeoOptics and Spire, with a combined value of a little more than $1 million, for GPS radio occultation data.

In an April 3 interview, Steven Volz, assistant administrator for NOAA Satellite and Information Services, said those efforts were ongoing, with the contracts remaining open until the end of April, after which NOAA will study the collected data. While Spire has launched a number of cubesats able to collect GPS radio occultation data, GeoOptics has yet to launch its first satellite.

Volz said that NOAA was considering a second round of contracts for commercial weather data should it receive funding to do so in a final fiscal year 2017 appropriations bill. "That's just the tip of the iceberg. Hopefully it's a big iceberg of potential sources of commercial data that we can use to supplement and, eventually, potentially replace some of our core mission measurements," he said.

The first six COSMIC-2 satellites, developed in cooperation with Taiwan, are scheduled to launch on a SpaceX Falcon Heavy as part of the Air Force's Space Test Program 2 mission no sooner than late this year. A second set of six would launch to polar orbit in 2019.

The bill directs NOAA to enter into an agreement by the end of fiscal year 2018 with the National Academies to study future weather satellite systems. That study, due two years after the agreement is reached, would examine both the observational needs of scientists to improve weather forecasts and means to collect that data. It explicitly calls for assessment of the use of constellations of small satellites, standard bus designs and alternative sources of data, including commercial systems.