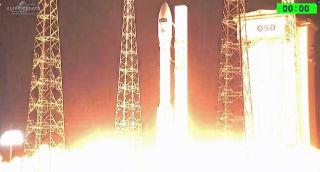 Europe launched its latest Earth-observation satellite tonight (March 6), a spacecraft that will help scientists monitor natural disasters and track land use and water pollution around the globe.

The Sentinel-2B satellite lifted off atop a Vega rocket from Europe's spaceport near Kourou, French Guiana, at 8:49 p.m. EST tonight (0149 GMT on March 7). If all goes according to plan, the spacecraft will settle into a polar orbit about 490 miles (786 kilometers) above Earth.

Sentinel-2B is the second member of the two-satellite Sentinel-2 constellation; its twin, Sentinel-2A, launched into an identical orbit in June 2015. Together, Sentinel-2A and Sentinel-2B will help researchers keep tabs on the world's forests, changes in land cover and other activities occurring on the planet. [In Photos: Earth 'Sentinel' Satellite Blasts Off]

"The mission mainly provides information for agricultural and forestry practices and for helping manage food security. Satellite images can be used to determine various plant indices, such as leaf area chlorophyll and water content indexes," European Space Agency (ESA) officials wrote in a mission description. "This is particularly important for effective yield prediction and applications related to Earth's vegetation."

The duo will also provide useful imagery of flooding, volcanic eruptions and other natural disasters, and will help monitor pollution in lakes and along coasts, ESA officials added.

Both Sentinel-2 craft are about 11.2 feet (3.4 meters) long and weigh 2,513 lbs. (1,140 kilograms). The two spacecraft will be separated by 180 degrees along their orbital path, allowing the duo to maximize their coverage of Earth. They will systematically monitor land and coastal areas between 84 degrees north latitude and 84 degrees south latitude, using a multispectral imager instrument that covers 13 spectral bands, ESA officials wrote. [How Sentinel-2B Will Deliver Unprecedented Earth Views (Video)]

Each satellite is designed to operate for a minimum of seven years.

Sentinel-2 is part of a larger European Commission Earth-monitoring program known as Copernicus, which will eventually include six different Sentinel "families." Some of the Sentinels are dedicated satellites, whereas others are instruments aboard other spacecraft.

The two Sentinel-1 satellites launched in April 2014 and April 2016, respectively, and Sentinel-3A lifted off in February 2016. All of the other Sentinels are scheduled to launch by 2020 or so.