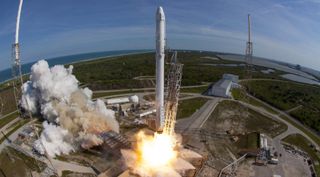 A SpaceX Falcon 9 launching a Dragon capsule to the ISS in April 2016.
(Image: © SpaceX)

ORLANDO, Fla. – SpaceX is scheduled to launch a payload for the National Reconnaissance Office in March 2017 from Cape Canaveral Air Force Station in Florida, a spokeswoman for the intelligence agency said May 18 in response to questions from SpaceNews.

SpaceX has not announced the launch. The NRO, which builds and operates the nation's spy satellites, is thought to have previously mentioned the contract in a public setting just once, during a congressional hearing three years ago.

The March 2017 mission is known as NROL-76, but further details about the launch, including which rocket SpaceX would use to lift the satellite, the cost of the launch, or whether the mission was competitively bid were not immediately available, an NRO spokeswoman said. [SpaceX's Latest Rocket Launch and Landing in Pictures]

During a question-and-answer session here at the GEOINT 2016 conference, Betty Sapp, the director of the NRO, was asked about the state of the launch industry. In her answer, Sapp praised the Hawthorne, California-based company for challenging the conventional wisdom about how to build a rocket and said "we've bought launches from SpaceX."

SpaceX previous launches, however, are thought to have included NRO payloads only one time. In December 2010, an NRO cubesat flew as a secondary payload aboard a Falcon 9 as part of NASA's Commercial Orbital Transportation Services Demonstration Flight 1. Since then, the company has not announced any NRO missions, nor do any NRO missions appear on the manifest on the SpaceX website. SpaceNews asked the NRO for clarification.

"SpaceX is under contract to launch NROL-76 in March 2017 from Cape Canaveral [Air Force Station]," Loretta DeSio, an NRO spokesman said in a May 18 email. “The NRO is anticipating the possibility of SpaceX supporting additional missions based on future competitions."

A SpaceX spokesman referred questions to the NRO. Almost all missions for the NRO are classified, which means the government announces few details.

The launch contract may be as much as three years old. In a 2013 House Armed Services strategic forces subcommittee hearing, Sapp told lawmakers that while she expected SpaceX to bid for launches in future competitions, "we are actually on contract with SpaceX for a smaller mission."