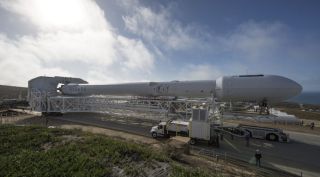 The April 27 award of an $83 million U.S. Air Force contract to launch a GPS-3 satellite gives SpaceX and its Falcon 9 rocket (shown above rolling out for the January 2016 launch of Jason-3) an important foothold in the national security launch market.
(Image: © SpaceX)

WASHINGTON — SpaceX has won an $82.7 million contract from the U.S. Air Force to launch a next-generation GPS satellite aboard its Falcon 9 rocket in May 2018, the first of nine launch contracts the Defense Department plans to put out for bid over the next three years.

The award announced April 27 by the Pentagon was all but certain to go to SpaceX since the only other qualified bidder, United Launch Alliance, sat out the competition saying, in part, it didn’t think it could win a cost shootout with SpaceX.

The contract also marks a significant first for Elon Musk’s rocket company, which DoD had previously only entrusted with small, experimental satellites. The deal is SpaceX’s first award under the Air Force’s Evolved Expendable Launch Vehicle Program, which since its inception has divided the launch of big-ticket national security satellites between the Atlas and Delta rockets. [The Rockets and Spaceships of SpaceX (Images)]

United Launch Alliance, which for the past decade has launched nearly every U.S. national security satellite, said in November it did not submit a bid for the 2018 GPS-3 launch in part because at the time it did not expect to have an Atlas 5 rocket available for the mission. The company also cited problems certifying its accounting system and concerns about how the Air Force would weigh price versus reliability, schedule certainty, technical capability and past performance in choosing a launch provider.

The win gives SpaceX a foothold in a national security launch market it’s been eager to crack for years.

In 2012, SpaceX gave the Air Force an unsolicited bid to launch the GPS 3 satellites for $79.9 million per launch. The Air Force rejected the offer, but initiated a process for certifying SpaceX’s Falcon 9 rocket to carry military and intelligence payloads to orbit. The Air Force completed that process in May.

But in four years since SpaceX tossed that unsolicited $79.9 million offer over the Air Force’s fence, SpaceX’s price for the GPS 3 mission barely moved. The new contract is a firm-fixed price contract for $82.7 million to cover launch vehicle production, mission integration, and launch operations and spaceflight certification, the Pentagon’s announcement said.

The GPS 3 mission is the first of nine medium-class launches the Air Force intends to put out for bid by the end of 2018. Of the nine, six are for GPS 3 satellites, all of which are in SpaceX’s wheelhouse and will pose a competitive challenge for ULA if the Air Force continues to make price a key deciding factor.

A request for proposals for the next GPS 3 launch, this time for the third satellite in the constellation, known as GPS 3-3, is expected later this spring.

ULA has said it plans to bid on the next mission.

Meanwhile, the same day the Air Force was preparing to announce SpaceX’s GPS 3 win, the Hawthorne, California, company upstaged the contract award by announcing over social media that it plans to send an unmanned version of its Dragon capsule to Mars as soon as 2018.

"SpaceX is planning to send Dragons to Mars as early as 2018," SpaceX said on Facebook. "Red Dragon missions will help inform the overall Mars architecture that will be unveiled later this year. These missions will help demonstrate the technologies needed to land large payloads propulsively on Mars."