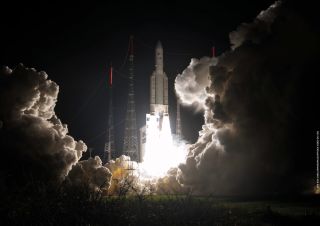 Paris-based Eutelsat said the satellite, built by SSL of Palo Alto, California, was healthy in orbit after separation from the Ariane 5 and had deployed its solar arrays. It is scheduled to enter full operations in early May – well in time to capture television business in Brazil during this summer's Olympic Games in Rio de Janeiro, Brazil.

As was the case with fellow fleet operator Intelsat, whose 29e satellite was launched in January, Eutelsat decided it was better to pay a bit more as a solo passenger than to wait for a compatible co-passenger aboard the Ariane 5.

But given Eutelsat 65 West A's mass of 6,564 kilograms, and the relative lack of smaller satellites ready for launch at the moment in launch-service provider Arianespace's order book, Eutelsat and Evry, France-based Arianespace concluded contracts in which neither Eutelsat nor Intelsat paid the full rate.

Ariane 5 prime contractor Airbus Safran Launchers and Arianespace said that by accepting to launch solo, Intelsat and Eutelsat allowed the Ariane 5 manufacturing and launch teams to smooth out the rocket-delivery schedule for 2016, giving them an incentive to offer Intelsat and Eutelsat modest price discounts.

Concluding two Ariane 5 launches by md-March will permit Arianespace to launch as many as eight Ariane 5 vehicles this year in addition to four missions with the Europeanized medium-lift Soyuz and the small-satellite Vega vehicles. All are launched from Europe's Guiana Space Center on the northeast coast of South America.

Eutelsat was in a hurry to launch 65 West A mainly because its 24-transponder Ku-band payload will provide direct-to-home television services in Brazil during the Rio Olympics this summer, a revenue opportunity whose loss would have been costly.

In addition, Hughes Network Systems of Germantown, Maryland, owned by EchoStar Corp. of Englewood, Colorado, has leased 16 of the 24 Ka-band spot teams carried by 65 West A and will use this 24 gigabits per second of throughput capacity to develop a consumer broadband business in Brazil.

The Hughes lease is for the full 15-year design life of 65 West A. A delayed launch would have delayed the flow of revenue from Hughes to Eutelsat.

The 65 West A carries 15 C-band transponders for trans-Atlantic video distribution.

Eutelsat is the world's third-largest commercial satellite fleet operator when measured by revenue. Among the major companies in its business it is among the most overtly patriotic in its selection of rocket and satellite providers.

Eutelsat's recent selection of a launch aboard a Falcon 9 rocket owned by SpaceX of Hawthorne, California, was newsworthy for having demonstrated that Eutelsat, whose stock is publicly traded, is willing to book business with Arianespace's biggest competitor.

The selection of a U.S. satellite builder, in this case SSL, is also a rare event for Eutelsat, which regularly reminds the French government – Eutelsat pays higher taxes than its main competitors, Intelsat and SES, both domiciled in Luxembourg – that it is the largest private-sector customer for Europe's satellite industry.