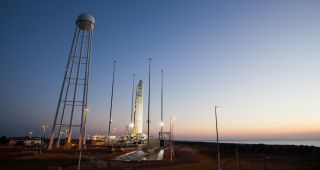 WASHINGTON — A draft version of a comprehensive space policy bill seeks to make changes to the management and regulation of space activities at NASA, the Defense Department, and other federal agencies while pushing the government to rely more on commercial capabilities.

A draft copy of the American Space Renaissance Act, sponsored by Rep. James Bridenstine (R-Okla.), runs nearly 100 pages and includes sections that address national security, civil and commercial space policy. Bridenstine's office is circulating the bill to seek feedback from industry before formally introducing the bill in April at the 32nd Space Symposium in Colorado Springs, Colorado. SpaceNewsobtained a copy of the draft.

Bridenstine, speaking Feb. 26 at a Commercial Spaceflight Federation breakfast here, said he did not expect the bill to pass intact.

"I expect it to serve as a conversation piece, as well as a repository for the best ideas that we can plug and play into difference pieces of legislation," he said.

Bridenstine serves on the House's Armed Services and Science, Space and Technology committees.

Part of the bill's civil space section is patterned after another bill, the Space Leadership Preservation Act. That bill seeks to create a board of directors for the agency that would select nominees for NASA administrator, who would then serve a 10-year term.

Bridenstine's bill addresses some of the criticism that bill received during a Feb. 25 hearing by the House Science Committee. His bill would create a larger "commission" with equal representation by the majority and minority parties in Congress who would nominate individuals to serve as administrator. The administrator would serve a five-year term, in response to concerns that a 10-year term may be too long.

The bill would create a "pioneering doctrine" for NASA, emphasizing human exploration and utilization of space. It amends NASA's objectives currently outlined in federal law to include "the expansion of the human sphere of influence throughout the Solar System."

It would also establish as NASA's "main priority" landing humans on the surface of Mars. As part of that direction, it requires NASA to cancel its proposed Asteroid Redirect Mission "unless NASA can compellingly demonstrate the mission's utility."

To implement that strategy, the bill authorizes multi-year appropriations for NASA starting in 2018. It creates a $250 million "NASA Flexibility Fund" that the agency's administrator could use supplement spending. However, it also requires the cancellation of NASA programs that exceed their cost estimates by 30 percent.

For commercial space, the bill seeks to drastically increase the authorized funding for the Federal Aviation Administration's Office of Commercial Space Transportation. The office, which received $17.8 million this year and is requesting $19.8 million for 2017, would instead be authorized for $43.2 million, increasing to $99 million by 2021.

Bridenstine has previously sought budget increases for the office, arguing that it does not have the staff and funding needed to handle projected growth in commercial launch activity. Bridenstine, in his Feb. 26 speech, said he would "exhaust every avenue" to get the office funded at its 2017 request.

The bill also establishes an "Office of Spaceports" within the FAA's commercial space transportation office. That office would administer infrastructure grants to spaceports that could eventually be funded by user fees similar to those imposed by airports.

The bill would begin the process of transferring responsibilities for space situational awareness from the U.S. Air Force to the FAA. It authorizes the FAA to obtain space situational awareness data and provide warnings of potential collisions, a task currently handled by the Air Force. It directs the government to name a lead agency for broader space traffic management activities by 2020.

Another priority for Bridenstine, increased government purchases of commercial data from satellites, is addressed in the bill. It directs the National Oceanic and Atmospheric Administration to develop rules for sharing weather data it acquires from commercial sources, and authorizes NOAA to spend $100 million per year on commercial space-based data buys.

In the military space arena, Bridenstine's bill pushes the Pentagon to consider non-traditional approaches to gain capabilities on orbit.

Most notably, the bill asks for the Pentagon to provide a plan for increasing the use of hosted payloads.

The Air Force has a contract vehicle for hosting government payloads, known as Hosted Payload Solutions, or HoPS, but for nearly two years, the Defense Department has not yet used that approach, which has been a source of frustration for industry.

The American Space Renaissance Act also pushes for full funding of the Pathfinder program, a series of experiments aimed at exploring new ways for the Pentagon to buy satellite bandwidth from the private sector. The Air Force's budget request for fiscal year 2017 includes $30 million for Pathfinder 3 and a combined $91 million for Pathfinders 4 and 5. That program is of particular interest to Bridenstine, who helped secure $26 million for the second experiment during the 2016 budget cycle.

The draft bill asks the Air Force to consider commercial approaches in several areas: including using industry to operate the Air Force's Satellite Control Network and to obtain weather data. It also accelerates the National Geospatial Intelligence Agency's commercial GEOINT strategy, a roadmap for the intelligence agency will use a host of commercial imagery satellite companies in the near future. Another section asks the Air Force's Operationally Responsive Space office to certify that prior to new development programs, no commercial entity can meet the same requirements.

During recent speeches and congressional hearings, Bridenstine has focused on bolstering space situational awareness capabilities. The bill would require the Defense Department, along with NASA, to create a technology demonstration program for orbital debris removal. It would also make the nearly year-old commercial integration cell, which helps give the Air Force a better sense of how commercial satellites are operated, a permanent part of the Joint Space Operations Center.