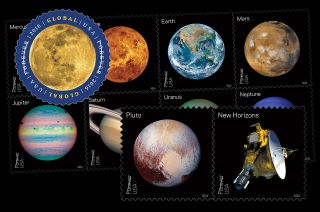 The U.S. Postal Service will issue stamp sets celebrating the moon and planets, as well as the New Horizons mission to Pluto in 2016.
(Image: © USPS (montage: collectSPACE.com))

The moon, the planets and Pluto will appear on United States postage stamps in 2016, the U.S. Postal Service (USPS) has revealed.

The USPS unveiled the designs for three separate stamp setshighlighting Earth's natural satellite, the eight planets in our solar system and the distant dwarf planet that was the focus of a historic spacecraft flyby in July 2015.

"The Postal Service recognizes the first reconnaissance of Pluto in 2015 by NASA's New Horizons mission," officials with the USPS stated in reference to the "Pluto–Explored!" sheet of four stamps.[Photos: Space Age Postage Stamps Through History]

On July 14, nine years after launching from Earth, the New Horizons robotic probe flew within 7,800 miles (12,500 km) of Pluto's surface, becoming the first spacecraft to explore the dwarf planet. The mission has provided the first close-up views of Pluto and its four moons.

The "Pluto–Explored!" stamps derives its title from another postage stamp released nearly a quarter of a century ago. The Pluto stamp in the 1991 "Space Exploration" planets-themed set included the phrase "Not Yet Explored" as part of its design.

"In 2006, NASA placed a 29-cent 'Pluto: Not Yet Explored' stamp in the New Horizons spacecraft," the USPS officials recounted. "In 2015 the spacecraft carried the stamp on its history-making mission to Pluto and beyond."

Alan Stern, the principal investigator for the New Horizons mission, said the project was proud to be honored with the new stamps. Stern and his team had earlier petitioned the USPSto recognize the flyby.

"Since the early 1990s the old, 'Pluto Not Explored' USPS stamp served as a rallying cry for many wanted to mount this historic mission of space exploration. Now that NASA's New Horizons project has accomplished that goal, it is a wonderful feeling to see this new stamp join the stamps for the first exploration of each of the other planets at USPS," Stern told collectSPACE.com.

The "Pluto–Explored!" stamps, as designed by art director Antonio Alcalá, feature both the spacecraft and the planet. The first stamp in the set shows an artist's rendering of the New Horizons probe and the second uses the spacecraft's image of Pluto taken near its closest approach.

"The view — which is color enhanced to highlight surface texture and composition — is a composite of four images from New Horizons Long Range Reconnaissance Imager (LORRI), combined with color data from the Ralph imaging instrument that reveals [Pluto's] now-famous heart-shaped feature," the USPS described.

Two of each the new Forever-denomination stamps will be included on the "Pluto–Explored!" souvenir sheet set to be dedicated between May 28 and June 4 at the World Stamp Show to be held at the Jacob K. Javits Convention Center in New York City.

At the same event, the USPS will also introduce "Views of Our Planets," a pane of 16 Forever stamps that showcase some of the "more visually compelling" full-disk images of the planets in our solar system. The eight colorful stamps, each included twice on the sheet, feature Mercury, Venus, Earth, Mars, Jupiter, Saturn, Uranus and Neptune.

"Some show the planets' 'true color' — what we might see if traveling through space. Others use colors to represent and visualize certain features of a planet based in imaging data. Still others use the near-infrared spectrum to show things that cannot be seen by the human eye," the Postal Service described.

Text on the back of the pane will explain what the images revealed about each planet and will identify the spacecraft and telescopes that were used to obtain them.

"The Moon," the USPS's third space-related stamp release in 2016, will highlight Earth's only natural satellite.

The circular stamp features the full moon as seen just after it rises above the Earth's horizon.

To be issued at the $1.20 price, this Global Forever stamp will be able to be used to send a one-ounce letter to any country for which First Class Mail International service is available. "The Moon" stamp will come 10 to a pane.

"The Moon," "Pluto–Explored!" and "Views of Our Planets" stamps are among more than 20 new subjects revealed by the USPS for next year. Another new set will mark the 50th anniversary of the debut of the original Star Trek television series with designs featuring the Starship Enterprise, the Starfleet insignia and the Vulcan hand salute.

See the full panes for the 2016 space stamps being issued by the USPS at collectSPACE.