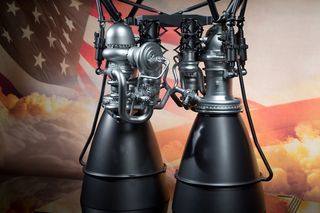 A 1/6 scale model of the AR1 engine currently in development by Aerojet Rocketdyne as a replacement for the Russian-built RD-180 engine that powers United Launch Alliance's Atlas 5 rocket.
(Image: © Aerojet Rocketdyne)

WASHINGTON — The U.S. Air Force awarded another round of research contracts Dec. 23 as part of a broader effort to end U.S. reliance on a Russian rocket engine for launching national security missions, according to posts on the Federal Business Opportunities website.

The three rocket technology research contracts are the largest the service has made to date. The recipients are: $3.1 million for Orbital ATK of Dulles, Virginia; $6 million for propulsion provider Aerojet Rocketdyne of Sacramento, California; and $5.4 million for Northrop Grumman of El Segundo, California.

The Dec. 23 postings did not include any details. The Air Force previously has indicated that initial research efforts would focus on reducing the cost of propulsion components and subsystems through the use of new materials and additive manufacturing.

The Air Force has said it plans to award a total of six to eight contracts, each ranging between $500,000 and $8 million in value, and with a combined value of as much as $35 million, for the effort. To date, the service has awarded seven contracts worth about $17 million.

Aerojet Rocketdyne is developing the kerosene-fueled AR1 engine to replace the Russian-built RD-180 rocket engine that powers United Launch Alliance's Atlas 5 rocket, a national security workhorse. The company also builds the hydrogen-fueled RS-68 main engine for ULA’s Delta 4 rocket as well as the RL-10 upper-stage engine, different variants of which are used on the Atlas 5 and Delta 4.

Northrop Grumman has a long legacy of ICBM work and in recent years has also co-designed an experimental rocketplane with Virgin Galactic for the U.S. Defense Advanced Research Projects Agency.