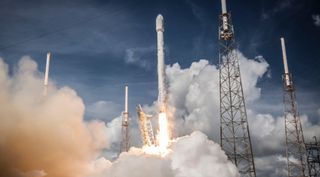 Elon Musk said SpaceX will launch its Falcon 9 rocket late next week on its first mission since a June launch failure.

Musk, in a tweet early Thursday, said a static fire test of the Falcon 9 is scheduled for Dec. 16 and, if successful, launch would take place "about three days later."

There had been rumors that SpaceX was planning to launch Dec. 19, but no official word from the company. The launch, when it does occur, will place 11 Orbcomm satellites into orbit on the first flight of the upgraded "full thrust" Falcon 9.

Orbcomm CEO Marc Eisenberg tweeted Wednesday that the satellites are fully fueled and that he was waiting for SpaceX to confirm a launch date. [Twitter @elonmusk / Twitter @Marc944Marc]

Sen. John McCain (R-Ariz.) said he'll consider a wider ban on use of RD-180 engines after ULA declined to bid on a GPS launch contract. McCain, chairman of the Senate Armed Services Committee, said he would weigh an "unrestricted prohibition" on use of the RD-180 in a letter to Secretary of Defense Ash Carter. He also requested an audit of ULA's accounting systems and a report on whether ULA tried to “subvert” Congress by assigning non-military launches to the limited stockpile of engines available for competition. ULA said last month it declined to submit a proposal for a GPS 3 launch because of the limitations of its accounting system and lack of available RD-180 engines. [SpaceNews]

O3b Networks announced Thursday it has closed $460 million in additional financing to expand its satellite fleet. The company said the "incremental financing" will allow it to purchase eight satellites to join the 12 currently in orbit. Thales Alenia Space will build those satellites, which will join the existing constellation starting in early 2018. O3b said it needs “substantially more capacity” to support its customers for broadband communications services. [O3b Networks / Thales Alenia Space]

Want to get these briefings even earlier? Here's the signup.

The House of Representatives is preparing a short-term extension of a continuing resolution (CR) as appropriators continue work on an omnibus spending bill. The new CR, to be considered by the House Rules Committee today, would run through Dec. 16. The current CR funding the federal government expires on Friday. Appropriators said they are making progress on a final spending bill for fiscal year 2016, but did not indicate when they think it will be ready. Work on the bill has been slowed by debates over policy rides some sought to attach to the spending bill. [The Hill]

The Dentist Meets the Space Lawyers

“Who in this room are attorneys? Raise your hands. Wow! I'm a health care professional. I'm scared.”

– Rep. Brian Babin (R-Texas), chairman of the House Science space subcommittee, speaking at the 10th Annual Eilene M. Galloway Symposium on Critical Issues of Space Law Wednesday in Washington. The congressman, who was a dentist before being elected, discovered that a large fraction of the event's attendees were, in fact, lawyers.

As one Atlas-launched Cygnus arrives at the ISS, Orbital ATK is preparing to fly another. The Cygnus, launched on an Atlas 5 Sunday, berthed with the station Wednesday morning, bringing 3,500 kilograms of cargo to the station. Orbital officials said they don't expect any many changes to the processing flow for a second Cygnus that will launch on an Atlas in early March. The company said it is also making good progress on replacing the first stage engines on its Antares rocket, allowing it to resume Cygnus missions as soon as late May. [SpaceNews]

ESA and Airbus Defence and Space signed a contract Wednesday to build a spacecraft bound for Jupiter. Airbus will build the Jupiter Icy Moon Explorer, or Juice, spacecraft under a 350 million euro contract. Juice will launch in 2022 and go into orbit around Jupiter, making multiple flybys of the planet's largest moons, seven and a half years later. [BBC]

India is preparing to launch a group of satellites for Singapore next week. The PSLV rocket will launch the six satellites Dec. 16, officials with India's space agency ISRO said early Thursday. The primary payload is an Earth observation satellite known as TeLEOS, weighing about 400 kilograms. The launch will also carry five smaller satellites. [IANS]

Bright spots seen on the surface of the dwarf planet Ceres are likely salt deposits. Analysis of the bright spots spotted by NASA's Dawn spacecraft led scientists to conclude they are hydrated magnesium sulfates, better known as Epsom salt. Studies of Ceres, the largest body in the main asteroid belt, suggest it has a large amount of water ice just below its surface, which main contain salts that are exposed by impacts. [SPACE.com]

The President likes The Martian. In an interview, First Lady Michelle Obama said that the movie about an astronaut stranded on Mars was the film he "most enjoyed" so far this year. She, however, preferred the animated film Inside Out. [People]