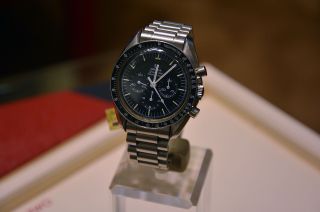 Four decades after it journeyed a quarter of a million miles out into space, a watch used by the last astronaut to orbit the moon alone is set to be sold at an auction dedicated to the make, model and history of the well-traveled timepiece.

On Dec. 15, during the 43rd anniversary of NASA's Apollo 17 mission, Christie's will open up bidding on more than 50 Omega Speedmaster chronographs, including a watch that flew along with command module pilot Ron Evans as part of an onboard experiment.

The auction, to be held at Christie's New York gallery, will also feature a Speedmaster that flew for a full year aboard the Russian space station Mir and the gold chronograph that Omega gifted Evans after his historic mission. [NASA's 17 Apollo Moon Missions in Pictures]

"We call it the 'quintessential American watch' because of its ties with the American space program, even though it is made in Switzerland," said Eric Wind, a vice president and senior specialist in Christie's watch department, in a recent interview about the Omega Speedmaster 50 auction. "That is why we are having the auction set for New York. It is our first thematic auction set for New York. Our other thematic [watch] auctions have been set in Geneva."

"I think there may be no more iconic a watch in American history than the Speedmaster," Wind said.

Heat flow vs. his flown

In the 1960s, NASA tested a number of different watches to determine which model would best survive the rigors of spaceflight. Ultimately certifying the Omega Speedmaster, the space agency issued the chronograph to its astronauts to wear while on their missions.

"It is a watch that I think a lot of people wanted when they saw the astronauts wearing it," Wind said, "when they saw photos in Life Magazine of Ed White with his black Velcro strap around his spacesuit holding his watch. It is the 50th anniversary of White's spacewalk this year, which is when the Speedmaster emerged in the public consciousness."

After the astronauts returned home to Earth, the watches remained NASA property. Today, a majority of the Omega Speedmasters that were flown to the moon are held in the Smithsonian's collection, and those that are not, are either on loan, missing or have been stolen from museums.

All that is, except one.

Like the other Apollo astronauts, Ron Evans had to hand over the Speedmaster he wore to orbit the moon in 1972. That Apollo 17 flown watch is now in the archives of the National Air and Space Museum. But Evans also had use of another Speedmaster that was mounted to a heat flow and convection engineering demonstration that was also aboard the command module "America."

At the end of the mission, Evans, like his crewmates and fellow moon voyagers, was permitted to keep a few pieces of spent equipment as mementos (a law passed in 2012 further affirmed that the Apollo-era astronauts had title to their space-flown souvenirs). Among the items Evans kept was the Omega Speedmaster that had been mounted to the heat flow experiment.

"This is the only Speedmaster that flew aboard the Apollo missions that can be owned, as far as we know," explained Wind.

Evans used an engraving tool to hand inscribe the watch to reflect its mission use. He wrote, "Ron Evans / Flown in CSM / to the moon/ Apollo 17" on the caseback and "6-19 Dec 72 Heat Flow Exp" on its side.

For its upcoming auction, Christie's has paired the Omega Speedmaster with the Velcro watch strap that Evans used to wear his NASA-issued Omega and a Fisher space pen he used on the flight. The strap is visible in photos and film footage of Evans as he spacewalked in the vicinity of the moon.

Christie's Omega Speedmaster auction includes one other example of a space-flown watch.

In July 1993, Omega launched 35 Speedmaster watches (28 in stainless steel and seven in gold) to Russia's space station Mir, where they orbited the Earth for a year. Each of the chronographs were inscribed on their caseback, "365 Days On Board Space Station Mir."

Christie's example is number 9 out of the 28 stainless steel chronographs that were flown on board the former orbiting outpost.

Beyond the space and moon-flown timepieces, Christie's sale includes numerous examples of the models that flew and the limited edition commemoratives Omega issued to celebrate its role on NASA's historic missions.

Among the lots are an "Ed White" — called such for being the same model as the first American to spacewalk wore in Earth orbit — and a Speedmaster that Omega produced in 2005 to mark the 40 year anniversary of White's Gemini 4 mission. The auction also offers Speedmasters that honor the Apollo 11 lunar landing and Apollo 13 missions, as well as the Apollo-Soyuz Test Project jointly flown by the United States and Russia.

"We are glad to be celebrating the whole space history of the Omega Speedmaster, from the very earliest models to some of the more recent limited editions," Wind said.