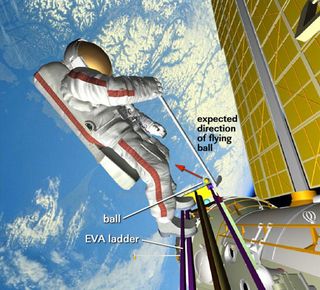 ISS Expedition 14 flight commander Mikhail Tyurin will whack the golf ball as part of a six-hour spacewalk planned for the night before Thanksgiving.
(Image: © NASA)

Going long will take on new meaning next week when an astronaut tees up and sends a golf ball flying from the International Space Station (ISS).

ISS Expedition 14 flight commander Mikhail Tyurin will whack the golf ball as part of a six-hour spacewalk planned for the night before Thanksgiving. Joining him will be commander Michael Lopez-Alegria. Flight engineer Thomas Reiter will remain inside the station tending to systems during the spacewalk.

Up first on the spacewalk schedule is a one-handed golf-shot by Tyurin [image]. The Russian cosmonaut will hit between one to three golf balls away from the space station. The shots are part of a publicity stunt to promote a new line of golf clubs by Element 21, a Canadian Golf club manufacturer. The balls are extremely lightweight, weighing only 1 gram each.

"To put this in perspective, if you took a one dollar bill out of your pocket, it weighs one gram," said leading spacewalk flight director Holly Ridings.

NASA officials said they estimate the golf balls will deorbit safely in two to three days, depending on atmospheric conditions.

"It poses absolutely no concern for the upcoming shuttle launch," Riding said.

Another major task scheduled for the spacewalk is the installation of hardware designed to measure charged and neutral particles in low-Earth orbit. The spacewalkers will also reposition a navigation antenna that will aid the automated docking of a future European cargo ship, and assess whether an antenna used to help dock Progress 23 last month is fully retracted.

"Our colleagues in Moscow are not exactly sure of the configuration of this antenna, and conveniently enough we had this EVA planned," Riding said. "So the crew is going to go back and take a look at the antenna and determine what we need to do about it, if it poses any issues to undocking the progress, which we'll do sometime in January."

Next week's spacewalk will be the fourth for Tyurin and the sixth for Lopez-Alegria.