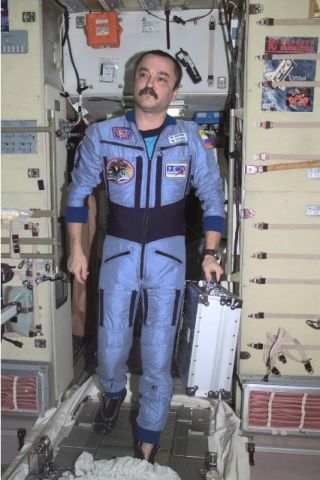 PERSONALDATA: MichaelTyurin lives in Korolev, a small city outside of Moscow. He was born March 2,1960, in Kolomna, Russia (about 60 miles from Moscow) where his parents stillreside. He is married to Tatiana Anatoleyvna Tyurin. They have a daughter,Alexandra, born in 1982. He enjoys sailing in his free time.

EDUCATION: He graduated from the MoscowAviation Institute in 1984 with a degree in engineering and a specialization increating mathematical models related to mechanical flight. He is currentlydoing graduate work in his field of research.

EXPERIENCE: After graduating from the AviationInstitute he began working at the Energia Corporation as an engineer.

The mainsubjects of his job have been dynamics, ballistics, and software development.His personal scientific research is connected with the psychological aspects ofcosmonauts' training for the manual control of spacecraft motion.

In 1993 hewas selected to begin cosmonaut training, and in 1998 he started training as aflight engineer for the Expedition3 crew. He also served as a backup crew member for the first ISS mission.

Tyurinlived and worked aboard the International SpaceStation for a total of 125 days during the Expedition3 mission.

Tyurin willserve as Soyuz Commander and Flight Engineer on the Expedition 14mission to the International Space Station. Launchis scheduled for September 2006.