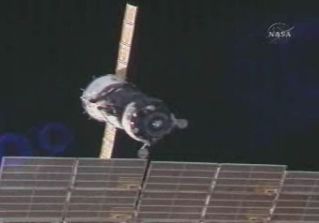 Thethree-astronaut crew of the International SpaceStation (ISS) took a short trip around the orbital block Tuesday to movea Russianlifeboat to a new parking spot.

The Soyuzrelocation began at 3:14 p.m. EDT (1914 GMT), when the Expedition 14 astronautscast off from the aft docking port of the station's Russian-built Zvezdaservice module as both spacecraft flew 222 statute miles (357 kilometers) overthe southern tip of South America. The three astronauts wore their RussianSokol spacesuits during the brief spaceflight.

Tyurindeftly guided the Soyuz to a new Earth-facing berth on the space station's Zaryacontrol module, where it docked at 3:34 p.m. EDT (1934 GMT) as the spacecraftpassed over the west coast of Africa.

"It's avery interesting sound actually," said Tyurin, a representing Russia's FederalSpace Agency, during the flight. "When the thruster's fire, it's almost as ifsomebody's taking a drum stick and banging it on the hull a bit."

Progress 23is slated to launch at 9:40 a.m. EDT (1340 GMT) on Oct. 23 from BaikonurCosmodrome, Kazakhstan in Central Asia and take about three days - one daylonger than typical resupply flights - to reach the ISS due to the station'sorbital position, Navias added. Docking is set for 10:36 a.m. EDT (1436 GMT) onOct. 26.

The ISS isalso home to an older Russian cargo ship - Progress22 - which arrivedat the stations' Pirs docking port on June 26.

Todaymarked the 23rd day of the Expedition 14 mission for Lopez-Alegria -a NASA astronaut - and Tyurin, but the 98th day in orbit for the Reiter,who represents the European Space Agency. Reiter arrivedat the ISS on July 6 and served with the station's Expedition13 crew before joining his new crewmates.

With theirSoyuz TMA-9 spacecraft now parked at its Zarya port - where it will stay untilits planned return to Earth in March 2007 - the Expedition 14 astronauts wereexpected to perform a two-hour series of leak checks before once more openinghatches to the ISS. They are expected to reenter the station by about 6:00 p.m.EDT (2200 GMT) and go to sleep by 11:00 p.m. EDT (0300 Oct. 11 GMT), ending a longday that began with crew wake-up at 4:30 a.m. EDT (0830 GMT), NASA officialssaid.