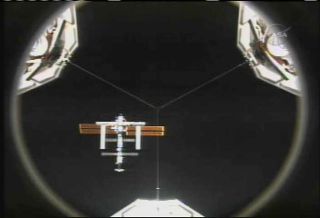 Discovery'sSTS-121 seven-astronaut crew, with shuttle veteran StevenLindsey in command, docked at the ISS right on time at 10:52 a.m. EDT (1452GMT) as the two spacecraft passed over the Southern Pacific Ocean. Ridingaboard the orbiter was German astronaut ThomasReiter, who will return the ISS back to its three-person capacity for thefirst time since the 2003Columbia accident.

"It'sgreat to see you out the window," ISSExpedition 13 flight engineer JeffreyWilliams told the oncoming Discovery astronauts.

Williamshas lived aboard the ISS since April 1 with Expedition 13 commander Pavel Vinogradov. The twoastronauts are in the middle of a six-month mission aboard the space station.

Hatchopening between the two spacecraft occurred 12:30 p.m. EDT (1630 GMT), with a jubilant andwarm welcome of hugs and smiles awaiting the STS-121 shuttle crew.

Lindseyflew Discovery through an orbital back flip while stationed about 600 feet (182 meters) below the ISS just before docking. The maneuver allowed theExpedition 13 crew to take a series of high-resolution photographs of theorbiter's tile-covered belly heat shield.

Analystswill sift through the images to seek out any signs of tile damage that couldprevent the orbiter from returning to Earth. So far, shuttle officials havesaid the orbiter's heat shield is in fine shape, but that today's back flipphotographs will allow for a more informed decision.

Inparticular, mission managers hope to learn how a series of about 5,000 gapfillers - which are wedged between some shuttle tiles -performed during Discovery's launch. The gapfillerswere replaced after the orbiter's last flight using a new process to fix themin place.

According toa NASA cargo manifest, Discovery is hauling more than 3.6 tons of supplies,equipment, food and spare parts to the ISS, some of which is tucked inside theorbiter's Italian-built Leonardo module, while more is stowed in thespacecraft's middeck and payload bay platforms.

NASA'sSTS-121 mission is the second orbiter test flight since the Columbia tragedythat destroyed one space shuttle and claimed the lives of seven astronauts. Thespace agency's first post-Columbia flight - STS-114, also aboard Discovery -launched to the ISS in July 2005.

While theSTS-121 mission will perform many of the test objectives left unfinished fromthat first spaceflight, it will more importantly return the ISS back to itsthree-person capacity.

"Fundamentally,we're building the space station as a permanent toehold off of Earth for ourexpansion into space," NASA chief Michael Griffin said before Discovery'slaunch. "Putting three people back aboard is a bigstep forward in the health of the program."

Anexperienced long-duration astronaut from his days on the Russian Mir orbitalcomplex, Reiter is Germany's first spaceflyerto the station and the first European Space Agency (ESA) participant in an ISSexpedition. His position on Expedition 13 is part of an arrangement between Russia's Federal Space Agency and ESAofficials.

ButReiter's ISS arrival did not automatically make him part of the station crew.

First, hemust bring in the seat liner for his slot aboard the Russian-built Soyuz spacecraftthat ferried the Expedition 13 crew to the ISS in April. The seat also servesas an escape craft in the event of an emergency. Reiter is scheduled to movehis Soyuz seat liner into position later today.

With thearrival of Discovery at the ISS, a busy week - or about eight days - begins forthe two spacecraft crews.

Latertoday, shuttle astronauts will use Discovery's 50-foot (15-meter) to hand offthe orbiter's sensor-laden inspection boom to the space station's robotic appendage.The boom hand-off will clear Discovery's arm to install the Leonardo cargomodule at the ISS on Friday, beginning the long process of transferringsupplies between the two spacecraft.

The STS-121mission's first spacewalk will begin on July 8, with at least one more plannedfor July 10. A third spacewalk could be added to the mission later depending onDiscovery's available fuel cell propellant.

But despitethat busy schedule, the Expedition 13 astronauts do hope to be good hosts andspend some quality time with their shuttle counterparts.

"I thinkwe'll get an opportunity, like we do when we're on the ground when we'reenjoying times with our friends," Williams said before Discovery launched. "Inthis case, it means floating around the dinner table and sharing ourexperiences. I think those will be the most special times that we have with theshuttle crew here."