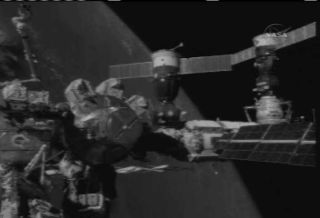 Twoastronauts aboard the InternationalSpace Station (ISS) welcomed the Monday arrival of a Russian cargo ship packedwith fresh food, equipment and other supplies for their orbital laboratory.

Progress 22delivered more than 2.5 tons of supplies for the Expedition 13 astronauts andtheir Expedition14 successors, who are expected to arrive in mid-September.

Tuckedinside the unmanned spacecraft's cargo hold are nearly 2,859 pounds (1,296kilograms) of food, tools, new equipment and other dry cargo. About 250 pounds(113 kilograms) of water, 100 pounds (45 kilograms) of air and oxygen, and 1,900pounds (861 kilograms) of ISS propellant are also packed aboard Progress 22,NASA said.

Vinogradovand Williams are expected to only partially empty Progress 22 this week,leaving its least critical cargo stowed as the two station astronauts prepareto receive their first human visitors - the seven astronauts of NASA's STS-121mission - slated to launch toward the ISS in five days.

NASA'sSTS-121 crew, commanded by shuttle veteran Steven Lindsey, is scheduled toarrive at the ISS aboard the Discovery orbiter on July 3 with their own cargopod full of new tools and equipment for the ISS. The shuttle will also ferryEuropean Space Agency (ESA) astronaut ThomasReiter to the ISS, where he will join the Expedition 13 crew as its third member.

ISS crewshave been limitedto two astronauts since the 2003 Columbia accident.

WithProgress 22's successful docking, three Russian spacecraft are now moored tothe ISS. An earlier cargo ship Progress21, which arrivedin April, sits at the aft end of the space station's Zvezda service module,while the Soyuz spacecraft that ferriedthe Expedition 13 crew to the ISS is berthed at a port on the laboratory'sZarya control module.