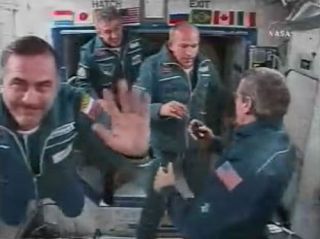 A newastronaut crew and the first Brazilian to leave the planet are aboard theInternational Space Station (ISS) after a two-day trek inside a Russianspacecraft.

Brazilianastronaut MarcosPontes and the 13thcrew to the ISS were greeted with smiles and handshakes by Expedition12 commander Bill McArthur and flight engineer Valery Tokarev, who are wrappingup a six-month stay aboard the orbital laboratory.

"It certainly is atreat to see these guys up here with us," McArthur said of the visitors in a post-docking video message.

"This is the final stop onour train," Vinogradov said after the docking.

The threeastronauts entered the ISS at about 12:59 a.m. EST (0559 GMT) from their perchat the Earth-facing port along the station's Zarya control module. Vinogradovand Williams will relieve the Expedition 12 crew and begin their own six-monthmission.

Pontes, whomade history this week as the first Brazilian to fly in space, waved his nation'sflag inside the ISS while speaking with space agency officials on Earth.

"I'm happy to behere," Pontes said just after entering the ISS. "And I've got theflag too!"

"OneBrazilian cosmonaut means that a small part of each Brazilian is now inspace," a Brazilian Space Agency official said during a post-docking pressconference.

NASA also purchased a seataboard the Soyuz TMA-8 flight to the ISS. Under an agreement with the FederalSpace Agency, NASA is paying about $43.8 million for Williams' flight to theISS and McArthur's return to Earth.

Vinogradovand Williams have a busy stint scheduled for their ISS mission.

Theastronauts are prepared to host two space shuttles missions - one in July andanother in August - that could not only return the ISS to its nominalthree-person crew, but also resume construction after more than three years ofdelay.

NASA'ssecond return to flight mission, STS-121 aboard Discovery, is slated to arriveat the space station in July with ThomasReiter, a European Space Agency astronaut who will join the Expedition 13crew.

"After morethan three years of flying two-person crews, we will maybe return the stationto its full capacity," Williams said before his flight.

Spacestation crews have been limited to twoastronauts since the Columbia accident.

TheExpedition 13 crew also has two spacewalks on their docket before NASA'sSTS-115 shuttle flight is expected to deliver a new set of solar arrays to theoutpost in late August.

All fiveastronauts aboard the ISS went straight to work after a brief, but traditional,welcoming ceremony.

The jointExpedition 12-Expedition 13 crew began buttoning down the Soyuz TMA-8spacecraft as Pontes prepared to begin a series of science experiments in the U.S. and Russian segments of the station. Their day won't end until about mid-day Saturday.

On Monday,Williams and McArthur are expected to camp out in the space station'sU.S.-built Quest airlock, where spacewalk managers hope to test an alternativeway to prepare astronauts for spacewalks in NASA spacesuits - which operate ata lower pressure than the ISS cabin.

But thethought of that hard work did not dampen Vinogradov's spirits as he and hisSoyuz crewmates neared the ISS.

"It'sa big station, beautiful," Vinogradov said as the Soyuz approached thespace station. "It's kind of dark but it's beautiful.