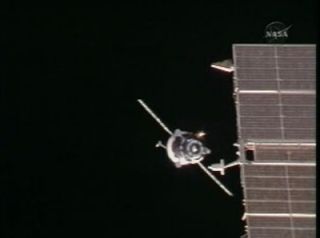 The Russian unmanned cargo ship Progress 21 is caught by a camera mounted to the exterior of the International Space Station as it prepared to dock at the outpost on April 26, 2006.
(Image: © NASA TV/collectSPACE.com.)

Twoastronauts aboard the International Space Station (ISS) welcomed the orbitalarrival of a Russian cargo ship laden with fresh food, water and somefreeloading crustaceans during a flawless Wednesday docking.

Theunmanned Progress 21 cargo ship docked at the ISS at 1:41 p.m. EDT (1741 GMT)after a two-dayspaceflight that ended at the aft end of the space station's Zvezda servicemodule. The two spacecraft were flying 220 miles (354 kilometers) above andnortheast of Greece at the time, NASA officials said.

"We havecapture," Russian ISS flight controllers told ISSExpedition 13 commander PavelVinogradov and flight engineer JeffreyWilliams via radio. "We'd like to congratulate you on an excellent job."

Also tuckedaboard the Progress supply ship are live crustaceans launched toward the ISS aspart of a Russian experiment called Aquarium, which is aimed at studying the performanceof a closed ecosystems in orbit. The data gleaned from the experiment may aidfuture long-duration space missions, NASA officials have said.

A golf teeand bag, to hold a golf balland club, also rode to the ISS aboard Progress 21, NASA officials added.The supplies will allow an ISS astronaut to whack a golf ball from the spacestation's exterior during an upcomingspacewalk in Russian spacesuits.

Vinogradovand Williams are completing the 28th day of the six-month missionaboard the ISS. Progress 21's arrival brings the total number of Russianspacecraft docked at station to three following the Expedition 13 crew's Soyuzvehicle - which parkedat a Zarya module port on April 1 - and an older Progress vehicle.

That oldercargo ship, Progress 20, dockedat the ISS on Dec. 23, 2005 and will be discarded in mid-June, Navias said.