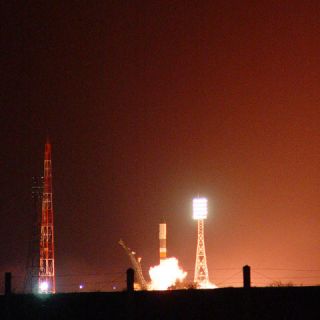 Twoastronauts living aboard the International Space Station (ISS) welcomed a freshshipment of food, water, parts and holiday gifts Friday after a Russian cargotug docked at the orbital laboratory.

"Santa'ssleigh has arrived," ISS Expedition12 commander Bill McArthur told ISS flight controllers after the successfuldocking. "Valery and I have been very good boys thisyear, so we're certain there are going to be lots of goodies on board."

"You mightwant to get to it soon before it goes bad," astronaut Ken Ham, serving asstation communicator at NASA's ISS mission control in Johnson Space Center,told the Expedition 12 crew.

Progress 20launchedtoward the ISS on Dec. 21, riding a Russian Soyuz rocket into orbit in a spaceshot staged from Baikonur Cosmodromein Kazakhstan.After two days of spaceflight, the supply ship docked smoothly at the spacestation's Pirs docking compartment at 2:55 p.m. EST(1955 GMT). McArthur and Tokarev watched over thespacecraft's arrival and were prepared to take control remotely if needed, NASAofficials said.

Progress 20joins a previous cargo ship - Progress19 - at the ISS. The older spacecraft was originally set to undock from theaft end of the space station's Russian-built Zvezdaservice module, but Russian flight controllers later decided to delay itsdeparture. The delay, set for March 2006, will allow more time for theExpedition 12 crew to load Progress 19 with trash and draw on its propellantand oxygen stores, NASA officials have said.

McArthur, aNASA astronaut, and Tokarev, a cosmonaut with Russia'sFederal Space Agency, are nearing the halfway mark of their six-month missionaboard the ISS. The Expedition 12 crew plan to celebrate a traditional Dec. 25Christmas, ring in 2006 on Jan. 1 and celebrate Russian Orthodox Christmas onJan. 5-6, McArthur said. [Click herefor NASA's video of the Expedition 12 crew's holiday message from the ISS.]

"For me,Christmas has always been perhaps my favorite time of the year," McArthur saidin prerecorded message, adding he will miss his family most at this time ofyear. "But at the same time, what a wonderful way to spend Christmas."

Theastronauts have at least one spacewalk - the secondof their mission - scheduled in February before returning to Earth on April 1.

The crew ofExpedition 13, cosmonaut Pavel Vinogradovand NASA astronaut Jeffrey Williams are expected to replace McArthur and Tokarev as ISS caretakers, Russian ISS officials have said.They will also ferry Brazil'sfirst astronaut, MarcosPontes, to the station for a brief stay before he returns with theExpedition 12 crew.