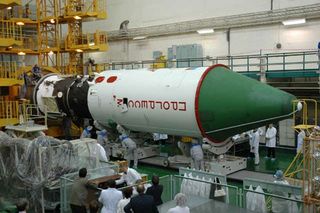 The Progress 21 cargo ship is tucked into its launch shrouf in preparation for an April 24, 2006 launch.
(Image: © RSC Energia.)

The International Space Station(ISS) failed to reach a higher orbit Wednesday during a test of twolong-dormant engines mounted near a Russian-built docking port.

Russian ISS flight controllers hopedto test two engines along the aft end of the station's Zvezdaservice module during a 14-second burn planned for 3:49 p.m. EDT (1949 GMT),NASA officials said. The engines have not been fired since Zvezdadocked at the ISS in July 2000, they added.

"We were all set for it but theengines never fired," NASA spokesperson Rob Naviastold SPACE.com.

The two dormant Zvezdaengines are located at the module's aft, a commondocking port for Russian Progress cargo ships and Soyuz spacecraft - one ofeach are attached to the ISS currently - which can also use their own enginesto boost the station's orbit. Other ISS engines are also available and NASAspace shuttles can also raise the station's orbit during docked operations.

"These are basically a backup to abackup of the prime engines on the module," Naviassaid of the aft Zvezda engines.

A stuck propellant isolation valvein one of the two engines prevented Zvezda'scomputers from performing the brief reboost maneuver,which was expected to nudge the ISS just three-tenths of a mile (0.4kilometers) higher than the station's current orbit of about 213.1 statutemiles (342 kilometers).

The reboostscrub does not affect plans for the arrival of Progress 21 - an unmanned cargoship slated to launch toward the ISS from Baikonur Cosmodrome in Central Asia's Kazakhstan on April 24.

Earlier Wednesday, Williams sent ashort message and video of himself exercising on a stationary bicycle down toEarth to support friends participating in the MS 150, a Texasbicycle race from Houston to Austin this weekend supporting the Lone StarChapter of the National Multiple Sclerosis Society.

Like the Expedition 13 crew,Progress 21 is also expected to take two days to chase down the ISS beforedocking on April 26. The Russian space freighter is currently scheduled to dockat the aft end of the station's Zvezda module at 1:52p.m. EDT (1752 GMT) during a live broadcast of NASATV. The cargo ship will join a previous supply vehicle already docked atthe station, Progress 20, which arrivedat the ISS on Dec. 23.