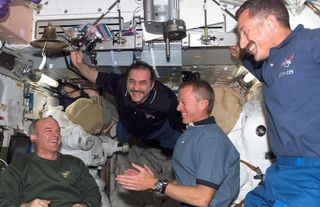 HOUSTON -After busy week of spacewalks and orbital construction, the six-astronaut crewof NASA's shuttle Atlantisrelaxed a bit Saturday at the International SpaceStation (ISS).

Atlantis' STS-115crew, commanded by veteranshuttle flyer Brent Jett, took a few hours off Saturday morning beforespeaking with reporters on Earth and hauling cargo between their Atlantisspacecraft and the ISS.

"We hopeyou enjoy the couple of free hours you have and enjoy your day," European SpaceAgency astronaut Hans Schlegel, serving as spacecraft communicator, toldSTS-115 mission specialist DanielBurbank as the crew awoke at 1:15 a.m. EDT (0515 GMT).

Missioncontrollers roused the Atlantis crew with Jimmy Buffet's "Twelve Volt Man," asong chosen for Burbank by his wife Ros and their children, Emily and Daniel.

"Thanksvery much for that great wake up music," Burbank told mission control. "It's agreat day up here in space and I really appreciate that. Thanks Houston."

Atlantis'six astronauts have a brief respite of sorts from the intense schedule theyfollowed to deliver the new, $372 million Port3/Port 4 (P3/P4) truss segments and new solar arrays to the ISS. Theastronauts launched on Sept. 9 and are now on Flight Day 8 of their mission.

But today'srest is a short break from the challenging days ahead, McCullough added.

STS-115mission specialist HeidemarieStefanyshyn-Piper, for example, is in charge of ensuring that all vitalcargos to be transferred from Atlantis to the ISS reach their destinations. Sheis also making sure the unneeded items aboard the orbital laboratory are packedaway in Atlantis' middeck.

As ofFriday, about 60 percent of that cargo transfer was complete, mission managerssaid.

"We had halfa day off this morning, and it gave us the opportunity first of all to sleep inbecause we've been very, very busy," Stefanyshyn-Piper said in a space-to-groundlink between the joint ISS-Atlantis crew and reporters.

Stefanyshyn-Pipersaid ISS Expedition 13 flight engineer Jeffrey Williams, a NASA astronaut, alsogave the shuttle astronauts a tour of the station during their off-time.

"Jeff gaveus a real nice tour of the International Space Station, going into some of themodules that we normally don't go into like the Soyuz capsule, which was veryinteresting, and the rest of the time was spent taking pictures and getting anopportunity to look out the window," she said.

Meanwhile,other STS-115 astronauts such as Jett and pilot ChrisFerguson are looking ahead to Sunday, when Atlantis is set to undock at8:50 a.m. EDT (1250 GMT) from the ISS and circle the station in a maneuverknown as a flyaround. The STS-115 astronauts will leave the station's Expedition13 commander PavelVinogradov and flight engineers JeffreyWilliams and ThomasReiter with much different ISS - with its new solar wings - than when theyarrived.

On Monday, Burbank his crewmates are expected to again surveytheir shuttle's heat shield with a sensor laden inspection boom to seek outany damage from micrometeorites or orbital debris.

"I thinkbasically they're getting a break...a little breather," McCullough said. "Butthey also have some pretty good activities ahead of them."

Atlantis'STS-115 astronauts, with the aid of the three-astronaut ISS crew, have stagedthree spacewalks in four days outside the orbital laboratory to wire up thestation's newest addition with power, data and fluid lines.

Theexhaustive schedule paused a day to allow the astronauts time to unfurlnew solar arrays on Thursday. A radiator for the solar arrays deployedduring the mission's finalextravehicular activity (EVA) on Friday.

"There aresome milestones that they had definitely been looking forward to, solar arraydeploy, radiator deploy and knocking out all these EVAs successfully,"McCullough said. "So they can take a breather [Saturday], get comfortable andthen jump back into it."