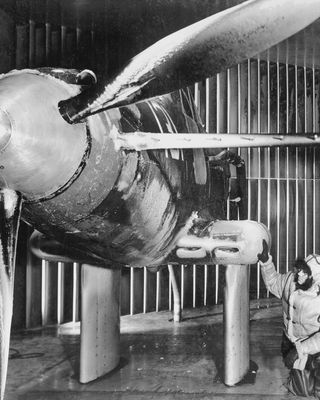 Testing at the Icing Research Tunnel in 1945 resulted in ice formations on the propeller and fuselage surfaces of this engine.
(Image: © GRC.)

In this historical photo from the U.S. space agency, these ice formations formed on the propeller and fuselage surfaces of a 1945 test unit installed in the Icing Research Tunnel at the Aircraft Engine Research Laboratory of the National Advisory Committee for Aeronautics, Cleveland, Ohio, now known as John H. Glenn Research Center at Lewis Field. The formations show what may happen to an airplane in flight under certain atmospheric conditions. Ice degrades the performance of an aircraft in flight and can cause loss of control.