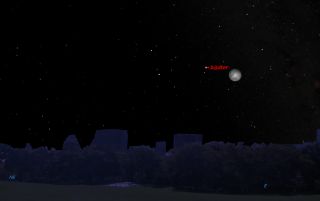 The bright planet Jupiter will shine near the moon on Dec. 18, 2013 and could dazzle skywatchers with clear night skies. This view shows how Jupiter and the moon will appear in the eastern night sky on Dec. 18 at 8 pm local time for observers in mid-northern latitudes.
(Image: © Starry Night Software)

Step outside Wednesday evening and look to the east-northeast sky for a surprising celestial sight.

If you're outside around 6:30 p.m. EST (2330 GMT) and weather permits, the first striking view you might get is the moon. It will be one night past full phase, but look more closely and shining prominently to the moon’s left will be a dazzling silvery-white, non-twinkling “star.”

As the evening wears on, both the moon and its brilliant companion will appear to ascend the sky side by side. This cosmic companion is not a star, but the largest planet in our solar system: Jupiter. [Amazing Night Sky Photos of December 2013 (Skywatcher Images)]

Jupiter currently blazes at negative 2.7 magnitude, meaning that it is three times brighter than Sirius, the brightest star in the sky. You can make a comparison between the two once Sirius rises above the southeast horizon just before 8 p.m. local time.

To find the star, just extend a line from the constellation Orion’s belt down and to the left and you’ll come to Sirius. It looks quite different from Jupiter. It appears to shine with a bluish-white tint compared to the sedate whiteness of Jupiter.

Right now, Jupiter rises around the end of twilight. By the end of December it will gleam low in the east-northeast sky as twilight fades, second only to Venus in brilliance. Jupiter climbs the eastern sky all evening, shines high in the southern sky in the middle of the night, and is low in the west at dawn.

Jupiter will come to opposition on the evening of Jan. 5, when it will also be nearest to the Earth at 391.4 million miles (629.8 million kilometers) away. In fact, Jupiter will be exactlyopposite to the sun in our sky.

Any hypothetical observer stationed at the giant planet would see the tiny black dot of the Earth cross in front of (or transit) the small disk of the sun, according to Belgian astronomer Jean Meeus.

The giant planet is a splendid sight in any telescope. Its disk is striped with prominent dark belts and light zones that are sometimes (in a good telescope) filled with detail. When looking at the gas giant through a telescope observers will also be able to view some or all of the famous Galilean moons — Europa, Io, Callisto and Ganymede. To see those moons, however, it might be best to wait until about 9 p.m. when Jupiter has climbed at least one-third of the way up from the horizon to the point directly overhead.

Moreover, Jupiter is near the northernmost part of the ecliptic (it appears in the constellation Gemini, the Twins), so observers at mid-northern latitudes see it cross the meridian at a good high altitude and well above the atmospheric turbulence experienced at lower altitudes.

Editor's Note: If you take a photo of the moon and Jupiter or any other night sky view that you'd like to share with SPACE.com for a possible story or gallery, please contact managing editor Tariq Malik at spacephotos@space.com.