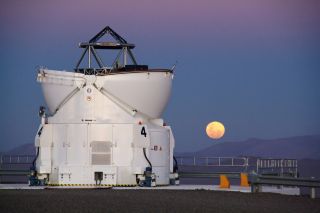 In Chile's Atacama Desert, home of the Paranal Observatory, the moon rises reddishly with one of the four Auxiliary Telescopes standing in the foreground.
(Image: © ESO/G. Lombardi)

This Thursday's full moon carries the title of "Harvest Moon" for those living in the Northern Hemisphere. But what gives the special moon its name?

Although we associate the Harvest Moon with autumn, this year's version is actually the last full moon of the summer season. In fact, it's this summer's fourth full moon, an oddity of sorts since most of the time there are only three full moons per season.

Many think that the Harvest Moon remains in the night sky longer than any of the other full moons we see during the year, but that is not so. The Harvest Moon's claim to fame is that instead of rising its normal average of 50 minutes later each day, it rises only a little later each night, providing farmers with extra moonlight to reap their crops.

This unusually small daily lag in the time of moonrise occurs because the moon is traveling along the part of the ecliptic (Aquarius and Pisces) that makes the smallest angle with the eastern horizon as seen from northern latitudes.

The local moonrise times for September 18, 19 and 20 are provided for select American cities in the chart below:

The Harvest Moon effect is greater the farther north you are. Indeed, the difference is less at more northerly locations (at Edmonton, Alberta, located at latitude 53.6 degrees north, the average difference is only 24 minutes).

In contrast, for those living in the Southern Hemisphere, the ecliptic at this time of year appears to stand almost perpendicular to the eastern horizon. As such, the difference for the time of moonrise exceeds the average of 50 minutes per night. In Sydney, Australia, for instance, the night-to-night difference amounts to 64 minutes.

For those who live near the Arctic Circle, the moon does indeed appear to rise at about the same time each night around the time of the Harvest Moon. And for those who live even farther to the north, a paradox: the moon appears to rise earlier.

For instance, on Sept. 16, 17 and 18 in Thule, Greenland, the moon will rise on average about 31 minutes earlier each night.

Editor's note: If you snap an amazing photo of the Harvest Moon full moon or any other night sky target and you'd like to share for a possible story or image gallery, please contact managing editor Tariq Malik at spacephotos@space.com.