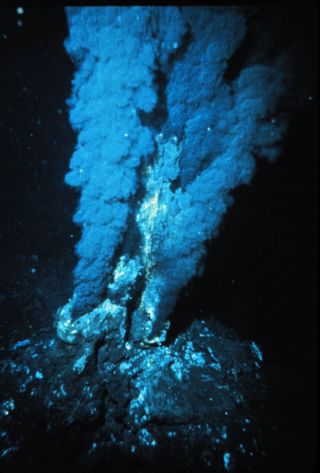 Photosynthesis—the harvesting of sunlight to produce energy—is the ultimate driver of virtually all life on the surface of our planet.

Most photosynthetic creatures rely on optical light, the kind we see, to energize their biological machinery. Yet some can make use of lower-energy (and invisible to our eyes) infrared light. And in the case of one kind of bacteria—discovered years ago, deep underwater near a hydrothermal vent—this light need not even come from the Sun.

A new study explores the potential for photosynthetic life to persist in such sun-starved conditions. The research aims to shed light, as it were, on how organisms could live off of the dim infrared emissions from hydrothermal vents on alien worlds. Tantalizingly, such vents are theorized to exist beneath the surface of Jupiter's ice-covered, oceanic moon Europa. [See Photos of Europa]

"When we became aware of bacteria using infrared light to photosynthesize, we felt very curious about checking the photosynthetic potential with this light because this is one measure of whether life could thrive around hydrothermal vents," said Rolando Cardenas, a physicist at Central University "Marta Abreu" de Las Villas in Santa Clara, Cuba and a coauthor of the paper published in the May issue of Astrophysics and Space Science.

The new findings suggest that photosynthetic life as we know it would struggle to flourish given the small amount of available light in hydrothermal vent environments. But organisms that could make use of lower-energy infrared light might find themselves with plenty to get by on in sunless circumstances.

Life blooming in the deep dark

In the oceans, hydrothermal vents form near underwater volcanoes where tectonic plates are moving apart at mid-ocean ridges. Hot magma that burbles up into the seabed superheats passing water that then spews out of the ocean floor, laden with minerals. The minerals precipitate out of the plume, building up chimney-like structures known as black smokers.

Although these deep-sea hydrothermal vents do not sound like particularly hospitable places, the scalding billows are actually biological hot spots.

Various kinds of bacteria dine on the materials such as iron, hydrogen sulfide and ammonia belched out by the vents. These bacteria in turn support whole ecosystems around black smokers, most famously characterized by tube worms, but also home to strange snails, crabs and much more.

Eight years ago, researchers led by J. Thomas Beatty of the University of British Columbia discovered a hydrothermal vent bacterium whose livelihood requires more than just ensnaring vent-water chemicals. The bacterium, identified as belonging to the green sulfur family, needs light in order to obtain energy through a chemical reaction with sulfur. This green sulfur bacteria species, however, was found in waters some 2,400 meters (7,875 feet) deep in the Pacific Ocean, off of the coast of Mexico. Photons of sunlight cannot beam down much past about 200 meters (660 feet) in the water column before being completely absorbed. Therefore, the bacterium must use the measly portion of geothermal light generated by hydrothermal vents to survive. This geothermal light is emitted when the erupting superheated waters rapidly cool in the surrounding, barely-above-freezing sea floor aquatic environment.

The bacterial species possesses an antenna-like structure that enables it to efficiently capture light. "It's the only example of an organism found that is thought to live off geothermal light," said Robert Blankenship, a professor of biology and chemistry at Washington University in St. Louis who was involved in the 2005 study. "The organism uses a giant antenna complex that allows it to live under extremely low-light conditions—it's about the best candidate you could come up with for living off of a hydrothermal vent through the absorption of photons."

Studying the hardy, sun-deprived life in remote areas such as hydrothermal vents is unfortunately a tricky and costly endeavor—the bacterium in question has not been re-isolated since. The new study by Cardenas and colleagues therefore turns to a mathematical model to assess the photosynthetic potential around the vents.

The researchers started with a concept vent that emits a similar amount of light as those described in the Beatty paper. A negligible amount of this light comes in the form of higher-energy, optical wavelengths; well over ninety-nine percent of the available light instead streams forth as lower-energy infrared light. [Extreme Life on Earth: 8 Bizarre Creatures]

The research team plugged in equations describing photosynthesis rates for surface water phytoplankton, tweaking them because ultraviolet light that can damage the plankton, and thus hinder photosynthesis, does not reach oceanic depths. A range of irradiance levels was modeled, as well as water temperatures spanning about 390 degrees Fahrenheit (200 degrees Celsius) to around 750 degrees Fahrenheit (400 degrees Celsius), consistent with black smoker outpourings.

Not an easy living

Overall, the calculated photosynthesis rates for infrared light-harvesting creatures were not very high, meaning that relatively little usable energy was extractable from the hydrothermal vent's emissions.

The results in this way jibe with the Beatty and Blankenship finding in that the green sulfur bacterium did not seem to be a dominant member of its community or a particularly robust species. "The organisms that we found in the vents on Earth, I'm convinced they were hanging on by their fingernails and just squeaking out a living," said Blankenship.

Indeed, for subterranean or submerged alien life to draw enough energy through infrared photosynthesis might require fundamentally different means, or at the very least a significant expansion of the wavelengths known to be usable.

Cardenas and colleagues pushed the envelope by considering hypothetical organisms that could absorb light with a wavelength as long as 1300 nanometers (billionths of a meter). That wavelength is considerably longer (and thus less energetic) than the light that Earthly species can accommodate. The infrared range is considered to start at 700 nanometers, and organisms have been documented reaping this invisible light out to about 1000 nanometers, Blankenship said.

Still, Cardenas said that in going a bit beyond terrestrial biology, he thinks that photosynthetic microbes could manage a living by the light from underwater hydrothermal vents. "Even with photosynthesis only until 1100 nanometers, green sulfur bacteria could do photosynthesis to some extent in a similar environment in Europa or other planetary bodies," said Cardenas.

Blankenship is a bit more skeptical. He pointed out that the water around hydrothermal vents would probably absorb much of the infrared light available, leaving only a very narrow patch of real estate for photosynthetic creatures to occupy, and one that would put them perilously close to the superheated water itself.  [6 Most Places for Alien Life in the Solar System (Countdown)]

"The amount of light that comes out of the vents at least here on Earth is very, very low," said Blankenship. "Still, it's always good to think about these things."

Under the Europan ice

At this point, the characteristics of hydrothermal vents on Europa and their attendant heat and light output are pure speculation. "Detailed internal models of Europa are still under some controversy," said Cardenas.

Europa has a thick, icy crust that scientists are pretty sure covers an ocean kept liquid by tidal flexing as Jupiter's gravity squishes and squeezes the moon. This flexing could also spur tectonic-like processes in Europa's mantle, leading to hydrothermal vents on its subsurface ocean's floor.

For now, infrared photosynthesis as a sole or complementary means of energy production by extraterrestrial microbes around alien hydrothermal vents looks like a long shot; the use of minerals, as practiced with great success in our oceanic abysses, makes more sense. Then again, no one had expected to find an abundance of life teeming around black smokers when they were discovered in 1977.

"Life does seem to find a way," said Cardenas. "We look forward to further studying infrared photosynthesis and its implications for life in less conventionally terrestrial habitats."