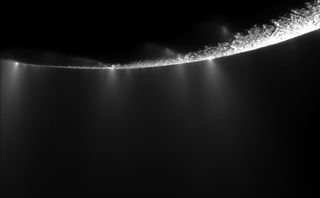 We still don't have hard evidence for any life that's not of this Earth, but across our solar system there are some tantalizing possibilities for primitive life to find a haven. Some moons of Jupiter and Saturn are intriguing, and there's also the chance for some surprises somewhere on Mars.

Here are my top six candidates for the best spots to search for primitive alien life in our solar system.

Seth Shostak is a senior astronomer at the SETI Institute in Mountain View, Calif.

In 2005, NASA's Cassini spacecraft photographed geysers of frozen water spewing from cracks in Enceladus' southern hemisphere. Scientists think reservoirs of liquid water lie beneath the frozen surface and are warmed by gravitational interactions between Enceladus and other moons around Saturn. The necessities for life are there, and maybe Enceladans are as well. The moon has a mean radius of 156.6 miles (252.1 km). [Photos: Enceladus, Saturn's Cold, Bright Moon]

Mars remains perennially popular for those hunting for otherworldly protoplasm. Particularly intriguing are the dark stripes that appear in the Martian summertime at Horowitz crater. These are likely to be salty meltwater only inches beneath Mars' dusty epidermis. A relatively simple probe could sample this muddy environment. Mars has a diameter of about 4,212 miles (6,779 km). [Amazing Mars Photos]

< a href=http://www.space.com/15257-titan-saturn-largest-moon-facts-discovery-sdcmp.html>Titan is Saturn's largest moon and the only world in the solar system (besides Earth) known to sport liquid lakes. These are lakes of ethane and methane — liquid natural gas — endlessly topped up by hydrocarbon rain. Despite the odd ingredients and Titan's gelid temperatures (minus 290 Fahrenheit, or minus 179 Celsius), it is a world where chemistry's a happening enterprise. Titan possesses diameter of 3,200 miles (5,150 km). [Photos: Titan, Saturn's Largest Moon]

Many would grant Europa a higher potential-life rating than I have, since there's probably more liquid water here than in all of Earth's oceans. The downside is that Europa's vast, salty seas lie beneath roughly 10 miles of ice. Not only is it difficult get a probe beneath this icy armor, but Europa's oceans are darker than a cave — which means photosynthesis won't work. However, something down there may subsist on geothermal heat or complex molecules from the surface. Europa possesses a mean radius of 970 miles (1,560.8 km). [Photos: Europa, Jupiter's Icy Moon]

NEXT STOP: Venus, the Hellish Planet

A surprise entry in the exobiology sweepstakes is our sister planet, Venus, with its scorching surface temperatures (850 F, or 454 C). The planet is generally assumed to be as sterile as a boiled mule.

But planetary scientist David Grinspoon, astrobiology curator at the Denver Museum of Nature and Science, points out that high in the Venusian atmosphere temperatures are refreshingly tolerable. Atmospheric sulfur dioxide and carbon monoxide might serve as food for floating microbes. Venus is 7,521 miles wide (12,104 km). [Venus, a Strange Planet Revealed (Photos)]

NEXT STOP: Callisto and Ganymede of Jupiter

I considered these two moons of Jupiter together, as I feel they're neck-and-neck candidates for biology. Like their more celebrated neighbor Europa, Ganymede and Callisto may have buried, liquid oceans. However, in the case of these two satellite siblings, briny deeps would underlie at least 60 miles (100 km) of rock. Finding inhabitants here is a shovel-ready project for our grandkids. Callisto has a diameter of more than 2,985 miles (4,800 km); Ganymede's diameter is 3,270 miles (5,262.4 km).