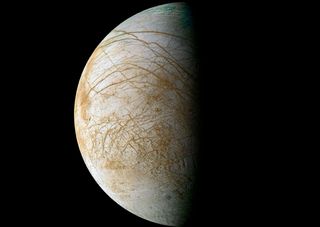 Complex and beautiful patterns adorn the icy surface of Jupiter's moon Europa, as seen in this color image intended to approximate how the satellite might appear to the human eye. The data used to create this view were acquired by NASA's Galileo spacecraft in 1995 and 1998.
(Image: © NASA/JPL/Ted Stryk)

Europa is one of the Galilean moons of Jupiter, along with Io, Ganymede and Callisto. Astronomer Galileo Galilei gets the credit for discovering these moons, among the largest in the solar system. Europa is the smallest of the four but it is one of the more intriguing satellites.

The surface of Europa is frozen, covered with a layer of ice, but scientists think there is an ocean beneath the surface. The icy surface also makes the moon one of the most reflective in the solar system.

Researchers using the Hubble Space Telescope spotted a possible water plume jetting from Europa's south polar region in 2012. A different research team, after repeated attempts to confirm the observations, saw apparent plumes in 2014 and 2016. The researchers cautioned that the plumes haven't yet been fully confirmed, but they do provide a suggestion that there is water in Europa's ocean jetting to the surface.

Several spacecraft have done flybys of Europa (including Pioneers 10 and 11 and Voyagers 1 and 2 in the 1970s). The Galileo spacecraft did a long-term mission at Jupiter and its moons between 1995 and 2003. Both NASA and the European Space Agency plan missions to Europa and other moons that would leave Earth in the 2020s.

Age: Europa is estimated to be about 4.5 billion years old, about the same age of Jupiter.

Size: Europa is 1,900 miles (3,100 km) in diameter, making it smaller than Earth's moon, but larger than Pluto. It is the smallest of the Galilean moons.

Galileo Galilei discovered Europa on Jan. 8, 1610. It is possible that German astronomer Simon Marius (1573-1624) also discovered the moon at the same time. However, he did not publish his observations, so it is Galileo who is most often credited with the discovery. For this reason, Europa and Jupiter's other three largest moons are often called the Galilean moons. Galileo, however, called the moons the Medicean planets in honor of the Medici family. [Photos: Europa, Jupiter's Mysterious Icy Moon]

It is possible Galileo actually observed Europa a day earlier, on Jan. 7, 1610. However, because he was using a low-powered telescope, he couldn't differentiate Europa from Io, another of Jupiter's moons. It wasn't until later that Galileo realized they were two separate bodies.

The discovery not only had astronomical, but also religious implications. At the time, the Catholic Church supported the idea that everything orbited the Earth, an idea supported in ancient times by Aristotle and Ptolemy. Galileo's observations of Jupiter's moons — as well as noticing that Venus went through "phases" similar to our own moon — gave compelling evidence that not everything revolved around the Earth.

As telescopic observations improved, however, a new view of the universe emerged. The moons and the planets were not unchanging and perfect; for example, mountains seen on the moon showed that geological processes happened elsewhere. Also, all planets revolved around the sun. Over time, moons around other planets were discovered — and additional moons found around Jupiter.

Marius, the other "discoverer," first proposed that the four moons be given their current names, from Greek mythology. But it wasn't until the 19th century that the moons were officially given the so-called Galilean names we know them by today. All of Jupiter's moons are named for the god's lovers (or victims, depending on your point of view). In Greek mythology, Europa was abducted by Zeus (the counterpart of the Roman god Jupiter), who had taken the form of a spotless white bull to seduce her. She decorated the "bull" with flowers and rode on its back to Crete. Once in Crete, Zeus transformed back to his original form and seduced her. Europa was the queen of Crete and bore Zeus many children.

A prominent feature of Europa is its high degree of reflectivity. Europa's icy crust gives it an albedo — light reflectivity — of 0.64, one of the highest of all of the moons in the entire solar system.

Scientists estimate that Europa's surface is about 20 million to 180 million years old, which makes it fairly young.

Pictures and data from the Galileo spacecraft suggest Europa is made of silicate rock, and has an iron core and rocky mantle, much like Earth does. Unlike the interior of Earth, however, the rocky interior of Europa is surrounded by a layer of water and/or ice that is between 50 and 105 miles (80 and 170 km) thick, according to NASA.

From fluctuations in Europa's magnetic field that suggests a conductor of some sort, scientists also think there is an ocean deep beneath the surface of the moon. This ocean could contain some form of life. This possibility of extraterrestrial life is one of the reasons interest in Europa remains high. In fact, recent studies have given new life to the theory that Europa can support life.

The surface of Europa is covered with cracks. Many believe these cracks are the result of tidal forces on the ocean beneath the surface. It's possible that, when Europa's orbit takes it close to Jupiter, the tide of the sea beneath the ice rises higher than normal. If this is so, the constant raising and lowering of the sea caused many of the cracks observed on the surface of the moon.

Obtaining samples of the ocean may not require drilling through the icy crust, should the repeated observations of possible plumes turn out to be actual jets of water. While researchers spotted evidence in 2012, 2014 and 2016, the true nature of the plumes — and why they appear sporadically — requires more observations.

In 2014, scientists found that Europa may host a form of plate tectonics. Previously, Earth was the only known body in the solar system with a dynamic crust, which is considered helpful in the evolution of life on the planet.

Europa: Where life may evolve?

The presence of water beneath the moon's frozen crust makes scientists rank it as one of the best spots in the solar system with the potential for life to evolve.

The icy depths of the moons are thought to contain vents to the mantle much as oceans on Earth do. These vents could provide the necessary thermal environment to help life evolve.

If life exists on the moon, it may have gotten a kick from deposits from comets. Early in the life of the solar system, the icy bodies may have delivered organic material to the moon.

In 2016, a study suggested that Europa produces 10 times more oxygen than hydrogen, which is similar to Earth. This could make its probable ocean friendlier for life — and the moon may not need to rely on tidal heating to generate enough energy. Instead, chemical reactions would be enough to drive the cycle.

In 2013, the U.S. National Research Council's Planetary Science Decadal Review issued its 10-year recommendation for NASA's planetary exploration program. Exploration of Europa was ranked as the highest-priority mission. Since then, NASA has been working toward a mission to Jupiter's icy moon. In 2017, the mission was officially called Europa Clipper after several years of the researchers and media informally using the moniker.

According to NASA, this mission — which will leave sometime in the 2020s, perhaps late in the decade — would perform 40 to 45 flybys of Europa with a spacecraft orbiting Jupiter. There will be nine scientific instruments on board including cameras, radar to peer beneath the ice and try to figure out its thickness, a magnetometer to measure the magnetic field (and by extension, how salty the ocean is), and a thermal instrument to search for signs of eruptions. The flybys would range in height between 16 miles (25 km) and 1,700 miles (2,700 km). This brings the flybys well into the radiation-heavy zone of Europa, which is tough for a spacecraft to survive. Bringing the spacecraft in and out of the zone will extend its lifetime and make it easier to transmit data back to Earth.

One of Europa Clipper's priorities will be to follow up on the Hubble observations of plumes. "If the plumes' existence is confirmed, and they're linked to a subsurface ocean, studying their composition would help scientists investigate the chemical makeup of Europa's potentially habitable environment while minimizing the need to drill through layers of ice," NASA said in a statement.

The European Space Agency also plans a mission to Europa and two other moons called JUICE, or JUpiter ICy moons Explorer. The mission is expected to launch in 2022 and arrive at Jupiter's neighborhood in 2029 for at least a three-year mission. Once it gets to Europa, the mission will look at organic molecules and other components that could make the moon friendly to life. Also, the spacecraft will probe how thick the crust is, particularly over any active regions it finds.