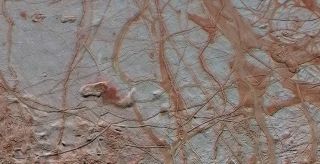 Jupiter's moon Europa might be able to support life even if there's little or no volcanic activity under the satellite's icy shell, a new study suggests.

A salty ocean of liquid water is believed to lie beneath Europa's icy exterior. Scientists think this ocean could be habitable, if it harbors the required chemical building blocks and the right proportion of elements to provide energy for biological systems — the right ratio of oxygen to hydrogen, for example.

The new study suggests that there is, indeed, enough of that energy. A research team led by Steve Vance, of NASA's Jet Propulsion Laboratory in Pasadena, California, found that, even without taking possible volcanic processes into account, Europa likely produces 10 times more oxygen than hydrogen, just as Earth does.

According to the team's calculations, Europa's hydrogen is generated as seawater reacts with rock in the moon's crust. Europa has cooled slowly over the eons, forming new cracks in the crust that expose more rock to seawater, thus generating more hydrogen, the researchers said.

Meanwhile, the oxygen would come from ice on Europa's surface. Radiation from Jupiter — which is far more intense than anything experienced on Earth's surface — breaks water molecules into hydrogen and oxygen. The oxygen then reacts with other compounds in the water as well as the hydrogen. As the oxidants sink, they get recycled into Europa's interior, and then into the ocean, study team members said.

Something similar could be happening at Europa, but nobody knows for sure if it is. Much speculation about possible Europan life envisions a biosphere that resembles the clusters of life found near hydrothermal vents on Earth's ocean floor. But the new research suggests that volcanism isn't necessary to cycle chemicals through the ocean, and thus is probably not necessary for living things to survive, study team members said.

The study was published online last week in the journal Geophysical Research Letters.