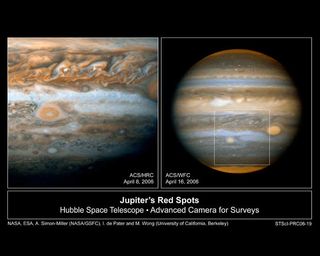 A storm is brewing half a billion miles away and in a rare event, astronomers get to watch it closely.

Jupiter is growing a new red spot and the Hubble Space Telescope is photographing the scene. Backyard astronomers have been following the action, too.

"Red Spot Jr." as it is being called, formed after three white oval-shaped storms-two of which were at least 90 years old-merged between 1998 and 2000.

A similar merger took place centuries ago and formed the bigger and legendary Great Red Spot, a storm twice as big as Earth and almost 300 years old.

Close inspections of Red Spot Jr., in Hubble images released today, reveal that similar to the Great Red Spot, the more recently developed storm rises above the top of the main cloud deck on Jupiter.

Little is known about how storms form on the giant planet. They are often described as behaving similar to hurricanes on Earth. Some astronomers believe that the spots dredge up material deep below Jupiter's clouds and lift it to where the Sun's ultraviolet light chemically alters it to give it a red hue.

The latest images could provide evidence that Jupiter is in the midst of a global change that can modify temperatures by as much as 10 degrees Fahrenheit on different parts of the globe.

The study was led jointly by Imke de Pater and Philip Marcus of University of California, Berkeley.

"The storm is growing in altitude," de Pater said. "Before when they were just ovals they didn't stick out above the clouds. Now they are rising."

This growth signals a temperature increase in that region, she said.

The global change cycle began when the last of the white oval-shaped storms formed south of the Great Red Spot in 1939. As the storms started to merge between 1998 and 2000, the mixing of heat began to slow down at that latitude and has continued slowing ever since.

The movement of heat from the equator to Jupiter's south pole is expected to stop at 34 degrees southern latitude, where Red Spot Jr. is forming.

This will create a big wall and stop the mixing of heat and airflow, the thinking goes. As a result, areas around the equator become warmer, while the poles can start to cool down.