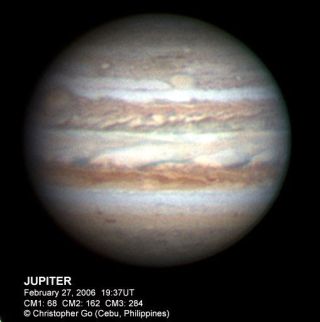 The official name of thenew storm is "Oval BA," but "Red Jr." might be better. It'sabout half the size of the famous Great Red Spot and almost exactly the samecolor.

Oval BA has been changingcolors in recent months. It was white in November 2005, slowly turned brown inDecember and then red a few weeks ago.

Curiously, no one knowsprecisely why the Great Red Spot itself is red. A favorite idea is that thestorm dredges material from deep beneath Jupiter's cloudtops and lifts it tohigh altitudes where solar ultraviolet radiation--via some unknown chemicalreaction--produces the familiar brick color.

"The Great Red Spot isthe most powerful storm on Jupiter, indeed, in the whole solar system," saidGlenn Orton, an astronomer at JPL who specializes in studies of storms onJupiter and other giant planets.

"The top of the storm rises8 km above surrounding clouds. It takes a powerful storm to lift material sohigh," Orton said.

Oval BA may havestrengthened enough to do the same. Like the Great Red Spot, Red Jr. may belifting material above the clouds where solar ultraviolet rays turn "chromophores"(color-changing compounds) red. If so, the deepening red is a sign that thestorm is intensifying.

"Some of Jupiter'swhite ovals have appeared slightly reddish before, for example in late 1999,but not often and not for long," says John Rogers, author of the book "Jupiter:The Giant Planet," which recounts telescopic observations of Jupiter overthe last 100 years.

Jupiter's Red Spot:Images of the Storm