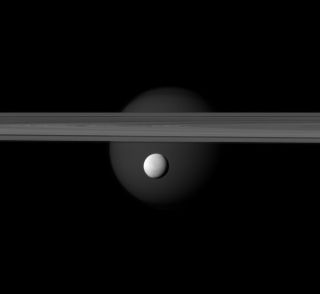 Saturn’s icy moon Enceladus hangs below the gas giant’s rings while Titan lurks in the background, in this new image taken by the Cassini spacecraft on March 12, 2012.
(Image: © NASA/JPL-Caltech/Space Science Institute)

The Saturn system started out with a family of several relatively large moons like the Galilean satellites of Jupiter (Ganymede, Europa, Callisto and Io), according to the new theory. But things changed with a few dramatic moon mergers, which created the Titan we know today and shed enough material to form satellites such as Mimas, Enceladus, Tethys, Dione, Rhea and Iapetus, researchers said.

"We think that the giant planets got their satellites kind of like the sun got its planets, growing like miniature solar systems and ending with a stage of final collisions," lead author Erik Asphaug, of the University of California, Santa Cruz, said in a statement.

"In our model for the Saturn system, we propose that Titan grew in a couple of giant impacts, each one combining the masses of the colliding bodies, while shedding a small family of middle-sized moons," Asphaug added. [Photos: The Rings and Moons of Saturn]

Earth's moon is thought to have formed from a giant impact about 4.5 billion years ago. And just as the moon and Earth are geochemical twins, the half-dozen or so medium-size moons of Saturn are similar in composition to Titan's icy mantle, researchers said.

"Our model explains the diversity of these ice-rich moons and the evidence for their very active geology and dynamics," Asphaug said. "It also explains a puzzling fact about Titan, in that a giant impact would give it a high orbital eccentricity."

Both Jupiter and Saturn have more than 60 known moons, but many of them are quite small, measuring just a few miles across. Scientists think most of these "moonlets" are captured asteroids or minor planets, or their remnants.

Asphaug and co-author Andreas Reufer, of the University of Bern in Switzerland, modeled the giant impact scenario using computer simulations.

They found that mergers between bodies the size of Jupiter's Galilean moons — which range from 1,940 miles (3,122 kilometers) wide in the case of Europa to 3,271 miles (5,264 km) across for Ganymede — would rip icy material from the outer layers of the colliding satellites.

This stuff would form ice-rich spiral arms, which would then clump together by gravitational attraction and create Saturn's medium-size moons (which are generally a few hundred miles across).

"These satellite collisions are a regime that is not very well understood, so the modeling opens up new possibilities in general for planet formation," Reufer said.

The moon mergers may have happened long ago. Or they could be more recent phenomena spurred by gravitational disruption caused by a migrating giant planet such as Uranus or Neptune, researchers said.

"What makes the Saturn system so beautiful and unique could be its youth," Asphaug said. "While we don't have a preferred timeframe for this origin scenario to play out, it could have happened recently if something came along to destabilize the Saturn system, triggering the collisional mergers that formed Titan."

New observations from NASA's Cassini spacecraft, which has been studying the Saturn system since 2004, should help the researchers know if their model is on the right track, Asphaug said.

"Our model makes strong predictions for how Titan was assembled, what the middle-sized moons are made of, and how they started out as rapidly spinning clumps of ice-rich material," he said. "So it's testable. These little moons could provide the clues telling us what happened, and when."

Asphaug and Reufer will present their model Friday (Oct. 19) at the annual meeting of the Division for Planetary Sciences of the American Astronomical Society in Reno, Nev. The new study will also be published in an upcoming issue of the journal Icarus.